Athletics: Thurrock Harriers crown a busy year on and off the track 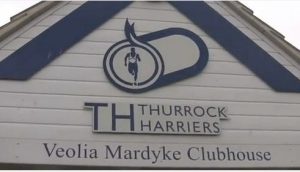 AMAZINGLY 318 people completed the Boxing Day Crown to Crown, 23 of them Harriers.

Taylor Newell led the field home with a magnificent effort of 17m24. Jack Exley was back to his best in 2nd place with 17m50 while Ben Prior came third seventeen seconds behind him. Two more top ten finishers were Toby Draper 7th and Shaun Brown 10th.

Demi Eves had a magnificent outing in 11th place just dipping under 20 minutes and was second female finisher.

It was also interesting to see Chris Hardy, now V50, running so well (20.54) and Danny Patten (23.35). Danny has been a professional cyclist since leaving Loughborough. Both were outstanding members of the club.

The South of England Combined Championship were held at Lee Valley 15th – 16th December with athletes from all age groups competing, many in new age groups.