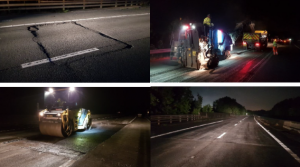 MORE than 5,000 potholes have been repaired on major roads across the East of England during 2018, in a massive £9m effort to put right the damage done by the severe weather earlier in the year, known as the ‘Beast from the East’.

Along with a £6.5m investment in a new feet of state-of-the-art gritting vehicles, Highways England is in a good position to meet any challenges that this winter throws head on.

More than 34,000 tonnes of material were used to make the repairs, covering a total of 240,000 square metres. In all, the new road surface that was laid is equivalent to resurfacing a 36 mile stretch of road, the distance from Cambridge to the M25. From the Bridge of Sighs in Cambridge to the Bell Common Bridge on the M25 to be exact.

“Repairing the damage done by the Beast from the East was a massive job, and I am grateful to local authorities for their cooperation in planning the work and to drivers for their patience while we carried it out. The concrete surfaces on many of the roads in the east of England are approaching the end of their serviceable life and will require wholesale renewal in the coming years, but repairs we have done over the past six months will help to keep the roads providing safe and reliable journeys in the meantime.”

At the same time, Highways England has been investing in a brand new fleet of gritting vehicles to keep roads free of ice and snow this winter. The East of England will be the first region to use the new vehicles, which are part of a £30m national roll out over the next two years. The 34 new gritters taking to the region’s roads have state-of-the-art positioning and salt dosing technology, and can also be pre-programmed with information specific to each gritting route. This enables salt to be spread onto the road automatically, taking into account any specific requirements for bridges, landscape and other road features allowing drivers to give their full attention to driving at all times.

The vehicles also have a redesigned rear end, designed to reduce the risk of collisions.

“Despite weighing 26 tonnes and measuring up to 2.5 meters wide, we have seen a number of incidents where gritters have been struck by vehicles. Although the vast majority of people support our gritter drivers by leaving a sensible distance and only passing when it’s safe to do so, we do have occasions when people misjudge the situation and end up colliding with one of our vehicles.

“We have also noticed a growing problem with drivers using the hard shoulder to undertake gritters, risking a collision with stationary vehicles on the hard shoulder and causing a hazard to gritter drivers who need to exit at motorway junctions. The design improvements we have made should help make gritters harder to miss than ever, but our advice to drivers is simple – please give our gritters the space they need to do their vital job.”

During severe weather drivers are urged to follow this advice:
• In snow and ice, drivers should stick to the main roads where they can and only travel if necessary
– drivers are also encouraged to make sure they have a winter kit in their vehicle, including an ice scraper and de-icer, warm clothes and blankets and sunglasses to cope with the low winter sun.
• In high winds, there’s a particular risk to lorries, caravans and motorbikes, so drivers should slow down and avoid using exposed sections of road if possible
• In heavy rain, drivers should keep well back from the vehicle in front, gradually ease off the accelerator if the steering becomes unresponsive, and slow down if the rain and spray from vehicles makes it difficult to see and be seen
• In fog, drivers should switch on their fog lights and not use lights on full beam as the fog will reflect the light back. If you really cannot see, you should consider stopping until it is safe to continue