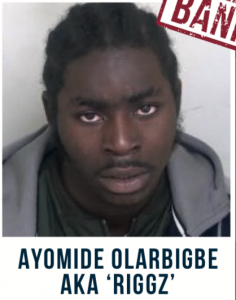 A MEMBER of a gang, who is the subject of a tough gang injunction, has been sentenced for dealing the Class B drug cannabis.

Basildon Crown Court heard how officers were patrolling in Grays on May 8 last year when they spotted 22-year-old Ayomide Olaribigbe who was wanted in connection with an unrelated offence.

He was arrested and taken to Grays police station where he was searched and found to be in possession of five bangs of eight bags of cannabis containing more than 11 grammes of cannabis worth £100.

Olaribigbe of Willow Street, Romford was charged with possession of a Class B drug with intent to supply.

He admitted the charges at Basildon Crown Court where he was given a six-month jail term suspended for 12-months and was ordered to carry out 100 hours of unpaid work.

Sgt Scott Fitzmaurice said: “We will not tolerate anybody – regardless of whether they are subject of a court order – dealing drugs in our area.

“Operation Raptor will continue to target all those individuals, including members of the C17 gang, intent on committing drug or gang related crime in our county.”

Olaribigbe is one of several members of a drug-dealing gang linked to a series of violent incidents and anti-social behaviour in Thurrock.

In September last year, Olaribigbe and nine other members of the gang, who call themselves “C17”, were made the subject of the order.

It bans them from large parts of Thurrock as well as a raft of other restrictions, including making so called ‘drill’ music videos and wearing face coverings or hoodies.

The gang first came to the attention of the Operation Raptor team in May 2017 as they became heavily involved in drug dealing and violence.

The gang have plagued the town centre, town park and beach areas of Grays as well as Lakeside, dealing drugs in those areas and committing crime and disorder.

Evidence presented to the court to secure the injunction heard that the gang preyed on young children in the community, enticing them into the gang and then exploiting them by getting them to run drugs, carry cash from deals or knives.

During the injunction hearing, the court were told the gang use young girls, including those who have gone missing from home, to hold drugs for them. A number of members of the gang have been arrested for serious sexual offences including victims under the age of 16 and have been investigated for Child Sexual Exploitation offences.

The gang are also known to target vulnerable drug users, using violence and intimidation to take over their homes for use as a drug dealing base (a practice known as ‘cuckooing’).

Violence around C17 is mainly borne out of rivalry with other gangs and drug lines. This has also played out in numerous so-called ‘drill’ music videos filmed by members of C17 which feature weapons and provocative language and gestures. Drill is a type of rap music that originated in South Chicago in America. It features dark, violent lyrics and is often used to perpetuate and even escalate gang disputes.