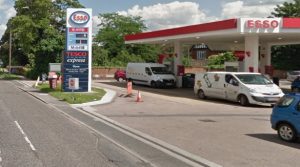 A MAN who was run over by a lorry on the forecourt of a petrol station was suspected of shoplifting from the store.

It is alleged that the man was being pursued by staff from the Tesco petrol station on North Road in South Ockendon when he slipped and fell under the wheels of a lorry that was manoeuvring out of the forecourt.

Essex Police has confirmed to YT that they had been informed of a complaint of shoplifting as part of the original call.

The man, aged in his thirties, was taken to hospital with a serious leg injury.

“We were called at 3.40pm today, Thursday, January 10, with reports of a collision between a lorry and a pedestrian.

“The pedestrian, a man aged in his 30s, was taken to hospital with a serious leg injury.

“A 39-year-old man from South Ockendon was arrested at the scene on suspicion of driving under the influence and he has been released under investigation”.

EMERGENCY services were called to a road traffic collision between a lorry and a pedestrian.

The collision occurred on North Road near to the Tesco petrol station.

YT understands that all emergency services were in attendance including the Essex air ambulance.

We have contacted the emergency services for a comment.