“We were called at 10.51am yesterday with reports of a cardiac arrest and a second unwell patient in Mayflower Road, Chafford Hundred.

“We sent two ambulances, an ambulance officer and the Essex and Herts Air Ambulance.

“Two patients were taken to Basildon and Thurrock Hospital by land ambulance.

AN ESSEX air ambulance has landed in Chafford Hundred.

Other members of the emergency services are also in attendance in a field not far from Harris Academy. 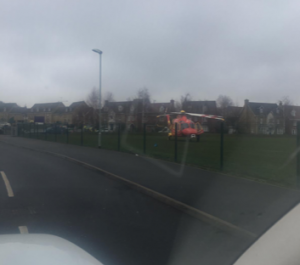