Thurrock Council pledge to get tough on fly-tippers

THURROCK Council is launching a hard-hitting campaign to let fly-tippers know that their criminal behaviour will not be tolerated in the borough.

The campaign warns anyone using Thurrock to illegally dump rubbish that they face prosecution, which can lead to a huge fine or prison sentence and a criminal record.

As well as targeting fly-tippers the council is giving residents the information they need to avoid having their waste taken by unlicensed and unscrupulous waste carriers, which could end up landing them with a hefty fine. 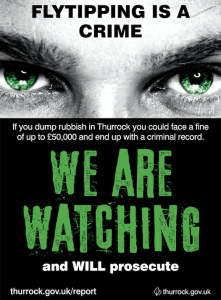 Cllr Aaron Watkins, portfolio holder for Environment and Highways, said: “Fly-tipping is a selfish and disgusting act and we will use all the powers available to us to ensure that anyone involved faces the consequences of their actions.

“We spend a significant amount of money keeping our streets clean and to dump waste in Thurrock shows a complete lack of respect for the borough.

“We will fine wrong-doers on the spot and even take people to court where they can be given a huge fine or a prison sentence.

“The message of our campaign is simple: if you dump waste in Thurrock be prepared to face the full force of the law.”

Fly-tipped waste can be reported at thurrock.gov.uk/fly-tipping