BASILDON Council has dismissed the possibility of its Thurrock counterpart building homes within its boundaries as “not a realistic option”.

Thurrock Council is currently undertaking a consultation into how the borough will accommodate more than 30,000 new homes included within its Local Plan. 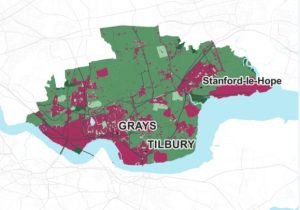 This week Basildon Council’s Strategic Planning and Infrastructure Committee will meet to discuss certain aspects of that consultation, including whether some of Thurrock’s planned homes could be built across the boundary with Basildon.

A report published ahead of the meeting says that Thurrock currently has forecast supply of around 6,478 homes over a 20-year period, compared to a need of between 23,460 and 27,620 – a shortfall of up to 77 per cent.

The report goes on to call the idea of some of these homes being built within Basildon “not a realistic option” due to “insufficient capacity within non-green belt locations across South Essex to meet housing needs”.

It adds: “Basildon Borough is already seeking to meet around 50 per cent of its need within the Green Belt having been unable to meet its own needs within its urban areas. Basildon Borough can evidence that it cannot therefore assist Thurrock Council in this regard.”

Basildon Council says a better option for Thurrock would be to consider building on its own green belt – which makes up two-third of the borough, the report continues.

This could result in a new settlement of at least 10,000 homes built to the south of West Horndon and close to Basildon’s western boundary. But without infrastructure improvements, this could create more congestion on the A127.

Another option is for Thurrock to develop sites which are not likely to be large enough to warrant infrastructure improvements, one of which could be in Fobbing close to Basildon’s southern boundary.

The report notes: “This site is of particular concern from a Basildon Borough perspective as there are implications from development in this location on the Five Bells junction nearby.

“This is not only due to increased traffic, but also as a consequence of the level crossing which sits between the site and the Five Bells junction.

“Significant development in this location has the potential to generate queues at the level crossing, which would in turn lead to traffic backing up that would affect the operation of the A13 junction and would need to be avoided.”

Members of the Basildon committee are expected to agree that the council should put forward a detailed response to Thurrock’s plan and highlight concerns over how it could impact the area.