PUBLIC Health England (PHE) in partnership with the 12 local authorities across the east of England and the Terrence Higgins Trust (THT) have today launched a social media campaign aimed at raising awareness of the rise in syphilis.

The campaign is primarily aimed at gay, bisexual and men who have sex with men (MSM) as this group represents 75% of the 301 syphilis cases diagnosed in 2017 but anyone who is sexually active is potentially at risk. Pregnant women with syphilis can also pass the infection onto their unborn baby which can cause miscarriage or stillbirth. 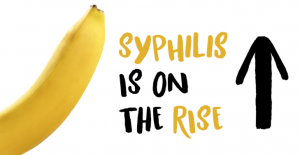 Using eye-catching campaign materials, the goal is to raise awareness of the risk of syphilis, its signs and symptoms and how the risk of catching it can be reduced by practising safer sex.

Dr Mark Reacher, Consultant Epidemiologist PHE East said: “We recommend that anyone having sex with a new or casual partner uses condoms and tests regularly for Sexually Transmitted Infections (STIs). Being seen by sexual health experts and having a laboratory test for syphilis will enable you to be accurately diagnosed and receive effective antibiotic treatment.

“It is always wise to have an idea of the symptoms of an STI so you can notice any changes in your health – in this case an indication of syphilis could be ulcers around your mouth or genital area or a blotchy rash on your palms or soles of your feet and flu-like symptoms. If you are worried, contact your local sexual health clinic for advice and treatment as soon possible.”

The symptoms of syphilis aren’t always obvious and may eventually disappear but if left undiagnosed and untreated, the infection can cause serious health problems.

Rachael Scott, Head of Hubs and Satellite Services for Terrence Higgins Trust said: “This eye-catching new campaign is ultimately about getting us all thinking more about what we’re doing to protect against STIs. Syphilis can cause serious health problems if not treated. However, in its early stages syphilis is easy to treat and cure with antibiotics. It’s important to remember that in some instances syphilis may have no symptoms or can mimic symptoms related to other health conditions, which is why getting tested is the only way to know for sure if you have it or not.”

Regular testing for HIV and STIs is essential for good sexual health and its particularly important to get tested if you’ve had sex without a condom (unprotected) sex, you have multiple sexual partners, or you are a man who has sex with men.

A recently divorced man in his 60s from the east of England caught syphilis after receiving unprotected oral sex from a short-term female partner. Although he used condoms for other sexual activity, he didn’t think he was at risk from unprotected oral sex. In this case it was passed through mouth sores.

Commenting on the syphilis awareness campaign, Dr Olwen Williams, President of the British Association for Sexual Health and HIV (BASHH) said: “BASHH welcomes this important new campaign to raise awareness of the signs and symptoms of syphilis. New syphilis diagnoses have risen sharply in recent years, particularly in men who have sex with men and in some cases pregnant women as well. We therefore urge all those who are concerned that they have been at risk of infection to visit their local sexual health service for a free and confidential check-up.”

All STI tests, including syphilis, are free and confidential on the NHS. Here in mid Essex testing is provided through the Essex Sexual Health Service.

A test can involve:

a blood test,
a swab test, where a swab (small cotton bud) is used to take a sample of fluid from any sores,
a physical examination, where a doctor or nurse will also ask to check your genitals or other parts of your body for sores.
Syphilis can usually be treated with antibiotics.

One Response to "Syphilis awareness campaign launched in Thurrock"