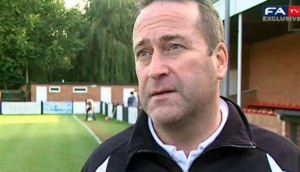 The board would like to thank all of the managers and coaches that have contacted Grays Athletic in the past couple of days and thank them for their interest in our club. However, it was agreed that Jim would be the ideal person to take Grays Athletic forward and when approached by our officials, he did not hesitate to accept the role.

Jim, who is based in Upminster, was manager for the Metropolitan Police FC for a total of 15 years where he took charge in over 850 league and cup games. He decided to leave the club in June 2018 due to the restructuring of the leagues. He won the Ryman South title in 2010-11 season after five previous attempts in the play offs.

Once in the Ryman Premier, he made the play offs on one occasion and also took the side to the first round of the FA Cup where they lost to Crawley Town 2-1. He won numerous county cups during this time and was beaten by Billericay Town FC in the League Cup Final in extra time at the end of 2017-18 season. As a player, Jim played for Barking, Leytonstone & Ilford, Dagenham, Aveley.

On confirming his move to The Blues Jim released the following statement, “I am delighted and very proud to be appointed as the new manager of Grays Athletic FC. I know that it will be a very difficult task to take over from a true legend of this club (Jamie) but as soon as I spoke with the chairman I knew what a fantastic opportunity it would be for me due to the plans the club has in place both on and off the pitch.

I aim to give the current squad every chance to remain with the club and will look at all of them at some point. In the short term, my plan is to improve our league position and win as many games between now and the end of this season which will hopefully show the fans that the club is in safe hands. My long term plan is to build a side that is capable of challenging for promotion. To do that, I will be looking to bring in some players this season who I know will add quality to the current squad and who I feel will also be part of my plans for next season.

I aim to forge closer links with the excellent youth teams that the club currently has at its disposal which I know can benefit the club in years to come and you will see me cheering them on from the sidelines on a Sunday morning.

Please feel free to come up to me in the bar at any time and introduce yourself. I will be available to answer any of your questions.