FOLLOWING the in-house success of their production, acting students at South Essex College will perform at the Queen’s Theatre in Hornchurch as part of a project by the National Theatre. 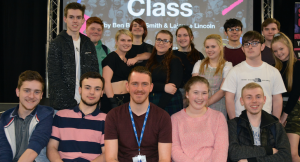 The students, part of the College’s Nu.Dynamic Theatre Company, will soon take to the stage at the Queen’s Theatre in April as part of the National Theatre’s Connections Festival 2019.

The festival sees the theatre, which is one of the three most prominent publicly funded performing arts venues alongside the Royal Shakespeare Company and the Royal Opera House, commission 10 new plays to work alongside schools, colleges and youth groups.

‘Class’ is set at the time of a school election and while most of the school is busy enjoying the lunchbreak, a deadlock is taking place amongst the members of the school council where bitter rivalries, secret alliances and false promises are laid bare.

He said: “I’m extremely proud of how the group have explored the story and themes to bring the production to life in their own way.

“Being part of the festival is a fantastic opportunity and will enable the students to experience first-hand what it’s like working in a real life theatre. This will enable them to develop their abilities and explore a variety of techniques and skills while working alongside an internationally renowned organisation.”

The group will perform at the Queen’s Theatre on Monday 15 April at 7pm. You can get tickets, which cost just £6 from www.queens-theatre.co.uk or by calling the box office on 01708 443333.

You can view an image gallery of the production on the College’s Facebook page at www.facebook.com/SouthEssexCollege

For more information about Performing Arts courses at the College visit www.southessex.ac.uk