More than half a million children missing vital measles vaccine 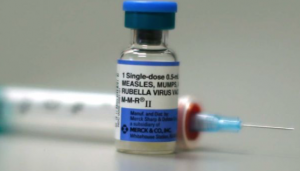 MORE than half a million children in the UK were not given a crucial measles vaccine between 2010 and 2017, an analysis by charity Unicef reveals.

It comes as NHS chief Simon Stevens warned measles cases had almost quadrupled in just one year and urged families to get the vaccine reports the BBC.

Globally, 169 million children missed out on the first dose of the vaccine over seven years, the report found.
‘
Measles is a highly infectious viral illness that can lead to serious health complications, including infections of the lungs, eyes and brain. In one in 25,000 cases, brain complications can be fatal.

Babies and children with weakened immune systems are most at risk of complications – more common ones include diarrhoea and vomiting, lung infections and fits caused by a fever.

Millions of lives worldwide have been saved by the measles vaccinations given to young children – but too many are still dying, the children’s charity Unicef says.

Health experts say children should have two doses of the vaccine to fully protect against the disease.
file picture of young boy with measlesImage copyrightLOWELL GEORGIA/SCIENCE PHOTO LIBRARY

In many countries, including the UK, the MMR vaccine protects against measles, mumps and rubella (or German measles).

The first dose is given to babies around their first birthday and the second dose before starting school, when three to four years old.

But, according to Unicef, a mixture of complacency, misinformation, scepticism about immunisations, and a lack of access to jabs has led to inadequate vaccination rates globally.

The US topped the list for the number of unvaccinated children in high-income countries, with 2,593,000 missing the first dose of the vaccine

The comparable figure for France was 600,000

The UK came third, with 527,000 children not getting their first dose of the vaccine over the seven-year period

In Nigeria, four million children under one did not get the first dose of the vaccine

The figures are based on Unicef and World Health Organization estimates of the number of children immunised against diseases in 194 countries in 2017.