A BUSINESS owner has launched a petition in a desperate attempt to stop the council from demolishing his café to make way for a Civic Centre expansion.

The petition was launched by Sadik Alakirik, owner of the popular Angel Café, on New Road in Grays, and has gained more than 100 signatures as well as support from Labour leader John Kent. 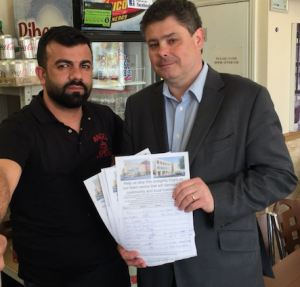 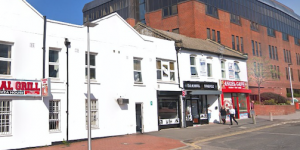 The café owner hopes it will help make people aware that plans for the £10million expansion of Thurrock’s Civic Centre will mean building on four shops on the corner of New Road and the High Street, causing many to lose their jobs.

“Customers keep asking me what is going on and I am really fed up, we have no answers. I don’t know what to tell people,” he said.

“I hope someone will speak to me face to face so that we can make a plan for the future. It is also not just me, it is all the businesses here. Everyone is worrying because we know nothing.”

He added that he has not been told anything about compensation for the loss of his business.

“We have no idea if we will be offered compensation – whether that is a new shop or money – we know nothing.

“Even if they did offer a new café in a different location I don’t know what I would do as it took a lot of hard work to build this business and many of my customers work at the council building.”

Another man who works in the area but asked not to be named echoed Mr Alakirik’s complaints about the lack of information from the council.

“We don’t know if the building has been sold or not,” he said.

Conservative Councillor and leader of Thurrock Council, Rob Gledhill, confirmed “there will be replacement premises for anyone wishing to relocate” but did not provide any further information about where these new buildings would be located.

He went on to slam Councillor John Kent for opposing the expansion and accused him of having “political amnesia” because half of the funding is coming from a £4.8million renovations budget that he approved as when he was leader of the council.

The rest of the money will be coming from the sale of the older half of the civic centre, which will be transformed into flats.

“Councillor Kent knows full well this went through the Labour chaired overview and scrutiny committee who were happy for this to move forward,” he said.

Mr Kent, who has been taking the petition to households in the area, is urging the Conservative administration to scrap the plans entirely.

“Businesses like the Angel Café are, rightly, angry at the way Thurrock Council is treating them,” he said.

“There are four people employed by the café yet the council hasn’t yet spoken to them at all – despite the fact they are only a few yards away.