THE Thurrock Hammers retained The Tunnel Trophy with a 35-36 win over The TouchTec Kent Kings, in a meeting abandoned after Heat 12 due to a curfew, following a nasty crash for the King’s Alex Spooner. 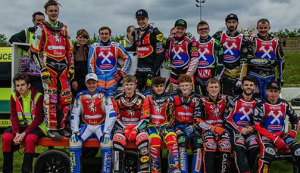 In a tight, competitive meeting full of spills, the Hammers got off to the best possible start with Number 1 Alfie Bowell taking the chequered flag in a re-run, after a competitive first corner with the King’s Drew Kemp in the first running.

After an initial all four back in heat 2, Hammers reserve Sheldon Davies showed good pace in the reserves race, taking second behind the impressive Dan Gilkes.

Andres Rowe then passed Hammers skipper Ben Morley in the third heat, and with Danno Verge bringing up the rear, the Kings opened a two point lead.

Ablitt then took a tumble in heat four, whilst former Hammer Robert Ledworth stretched his legs in front for the Kings, to win ahead of Hammers heat leader Nathan Stoneman.

Bowtell served up the best race of the day in heat 5, trading places with Anders Rowe numerous times throughout the four laps, before taking the victory, but with Jenkins keeping Laurence at the rear, the Kings maintained their slender lead.

Heat 6 saw Alex Spooner touch the tapes for the second time, resulting in a 15 metre handicap. Drew Kemp got the better of Stoneman, whilst Spooner edged passed Hammers reserve O’Keefe on lap two, to increase the Kings’ lead to four points.

Morley and Danno Verge reduced the deficit to two points with a 4-2 over Ledworth after Dan Gilkes over cooked it on bend two.

With the meeting delicately balanced, disaster then struck for the home team in heat 8, as Alex Spooner lifted exiting the second bend, hitting the back straight fence before being collected by the Hammers Sheldon Davies.

A lengthy delay occurred as Spooner was treated on track before being transferred to the County Ambulance. In the eventual re-run, Nick Laurence and Sheldon Davies nailed a 5-0 for the Hammers, after Ablitt fell whilst leading on the third lap.

With the 6pm curfew impending, a further three heats were run, each shared, but with the impressive Bowtell rounding off a full three ride maximum with a win, to clinch the Tunnel Trophy for the Hammers.

“We certainly enjoyed a very fair rub of the green and let’s hope that is a sign of continuing good fortune for the campaign.

Our main thoughts are with Alex Spooner who took the worst of a series of falls but the Hammers riders did themselves proud and rode sensibly in tricky conditions to snatch a win.

Our thanks are due to Len Silver for the invitation and to all the Hammers fans who came along to support the team.”

Update: The Hammers are pleased to hear that Alex Spooner has been discharged from hospital, with the rider confirming “Just left the hospital and can’t think of anything that doesn’t hurt right now. After a CT scan and x-rays, thankfully nothing is broken, however I have a part dislocation and rotary cuff damage to my shoulder – other than that I’m just badly battered and bruised!” Get well soon Alex.