THE Hollywood Bowl brought a touch of Tinseltown to intu Lakeside at its glitzy launch event on Wednesday 1st May.

Guests were treated to a night of flowing bubbly and sumptuous food from the alley’s brand-new Hollywood Diner, and had the chance to break-in the venue’s shiny new lanes. 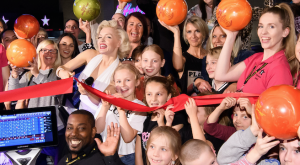 There was also the opportunity to have a photo with ‘Marilyn’, who made a special guest appearance on the night.

Guests were allowed to try out the alley’s ‘Hyper Bowl’ option, where hitting the bumpers is the aim of the game- and even multiplies your score!

Calvin Sheridan, Centre Manager for Hollywood Bowl at intu Lakeside said: “It’s thrilling to receive such a warm welcome, and to see all of our guests enjoy this exciting launch event.

“We’ve received a great response from customers since we opened the doors a few weeks ago, and now we’ve officially launched we’re excited to bring our unforgettable Hollywood Bowl experience to the families and shoppers of Essex.”

The alley’s large complex also features a state-of-the-art amusement area, complete with everyone’s favourite arcade games such as Mario Kart and Pacman Smash air hockey. There is also the opportunity to ‘Play for Prizes’, where visitors can play to win tickets, which are then exchangeable for fun goodies.

The new alley is a £3 million-pound investment by the Hollywood Bowl Group, and it graces Lakeside’s most recent development, The Quay. Lakeside marks the group’s 60th bowling centre.

In addition to the new bowling alley, the shopping centre’s £72 million-pound project will also see the introduction of more eateries to the area, along with Nickelodeon’s first family entertainment venue.