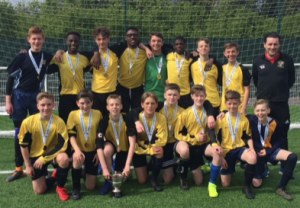 In numerous matches before the final, Ockendon faced several schools with excellent sporting pedigree. With fantastic victories over schools such as King Edward Grammar and St Bonaventure’s.

In the final, Ockendon found themselves a goal down after the ball passed under goalkeeper Samuel Griek, following a poorly defended corner. Ockendon responded quickly with goals before half time from Aleem Balogun and Jack Hellen; the latter being a lightening quick counterattack led by David Roberts with Jack Hellen finding the back of the net.

As Brampton Manor looked for a way back into the game, they started to leave noticeable gaps in defence and this was exploited by the attackers of Ockendon who added three further goals scored by David Roberts, Kai Dennis and Ashdon Legg. The Ockendon Academy finished worthy winners, with the trophy being lifted by captain Kaelan Casey.

Mr C. Stimson, Head of PE at The Ockendon Academy, commented:
“I would like to take the opportunity to congratulate both the students involved and Mr Banham on this outstanding achievement. The hard work, commitment and sportsmanship they have shown has been impeccable throughout the competition and they have been a truly fantastic representation of The Ockendon Academy.”