THURROCK Yacht Club’s 2019 season had a dramatic start. The Dragon Trophy had to be postponed from its original scheduled date of 25 April thanks to an untimely storm peaking just at the wrong time. 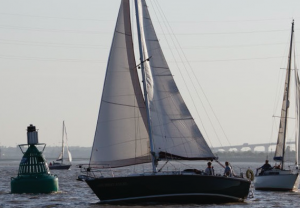 The race was rescheduled to the following Thursday night and 5 boats started – 2 in the A class and 3 in the B. The winds started out as a comfortable Force 3 from the west and all boats started taking full advantage of the slack water to tear towards the tug buoy on a broad reach.

The first incident occurred at the first mark with Hinemoa trying to sneak around inside the big boys, only to be squeezed onto the buoy. One penalty turn ensued. Then followed the beat up to St Clements. predictably the wind started to drop at this time.

Souffle was showing her heels on her first outing following a winter refit, with Southern Knight coming a creditable second. Hinemoa managed to make up some time on the long reach around thethird mark and the reach towards the White Hart buoy – at this point the race was shortened to a single circuit as the wind continued to drop and the tide gained strength.

Southern Knight made a smart tactical move to take advantage of the southern shore running up past Broadness before gybing and crabbing across the tide to White Hart. Souffle, Hinemoa and Us 2 all decided to chance their arm that the wind/tide balance would be in their favour and took the direct route – but the wind was continuing to fall and was by now barely a Force 2, with the sun setting.

Souffle (A Class) took line honours closely followed by Southern Knight (B Class). Each took victory on elapsed time in their respective classes. Hinemoa struggled against the tide to cross a distant third, but the light conditions, and lack of light, proved too much for Us 2 who had to retire, as did Serentity.