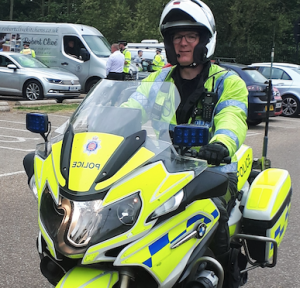 A TARMAC layer who was caught drug driving following some quick-thinking from a Special Constable in Tilbury has been disqualified.

At around 11.05am on Saturday 19 January, SC Stephen Nelson’s attention was drawn to a Vauxhall Movano, which was a towing a trailer in Church Road.

Having his concerns, SC Nelson stopped the vehicle and spoke to the driver who gave a positive reading to cocaine and cannabis.

Lee Palfrey, 33, of Barnfield Road, Woolwich, appeared at Basildon Magistrates’ Court on Monday 24 June, where he was banned from driving for 18 months and fined £250 for two counts of drug driving.

SC Nelson, who rides a motorbike with our Road Crime Unit, said: “Palfrey got behind the wheel of a vehicle and he towed a trailer while under the influence of drugs.

“I managed to get behind the vehicle and was so concerned about the manner of his driving, I took action to pull him over.

“Worryingly, he had been working that morning and he was arrested in his work attire when I stopped him.

“There are no excuses for drink and drug driving on our roads and Palfrey will face the consequences of his dangerous actions.”

If you have concerns about drink and drug driving, please contact us on 101 in a non-emergency or 999 in an emergency. You can also reported information by visiting www.essex.police.uk/do-it-online.