EVERY finisher was a winner in their own right in Sunday’s (30th) Horndon 10k. They had beaten the scorching heat to cross that finishing line.

The race was won by Paul Whittaker in 31m 18s – an outstanding time in the conditions. Former winner Crispian Bloomfield finished 80s behind. 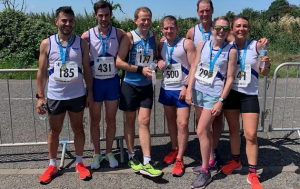 A great effort was put in by Lucy Golding who was third in the women’s event with an impressive time of 42m42s. Kathryn Spring was 5th in that section and 2nd in the FV35 age group.

The organising committee from the Harriers were the other winners. They received plaudits from all quarters for their slick organisation..