IT may have been the weekend when England won the Cricket World Cup, but for members of the Belhus team who travelled to Shoebury Park on Saturday, it will also be remembered for two amazing batting performances. 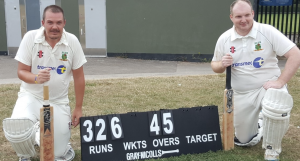 Opening batsmen Tom Thompson and Michael Cansdale were both undefeated with personal best scores of 145 and 163 respectively and together they created a club record partnership of 326.

Belhus website editor Denis Reed said: “The performance from this pair was simply phenomenal. I believe that this partnership was possibly the first-ever triple century partnership in the entire history of Thurrock cricket”.

“Michael’s score is now the joint second highest in the Shepherd Neame Essex League this season and the team tally was also a record score for the Belhus third eleven. For the record, hosts Old Southendian and Southchurch cricket club replied with a creditable 182 for the loss of nine wickets providing the North Stifford based club with a winning margin of 144 runs.