A SENIOR East of England MEP today warned the EU’s President in waiting that merely delaying Brexit would not be good enough when a new approach was required.

Geoffrey Van Orden CBE, leader of Britain’s Conservative MEPs, said some aspects of the existing Withdrawal Agreement were clearly unacceptable to the UK and would have to be addressed. 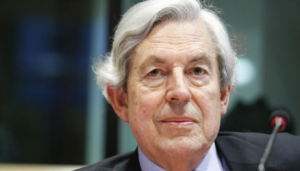 He was responding to Germany’s Defence Minister Ursula von der Leyen in debate at the European Parliament in Strasbourg. She is seeking the backing of MEPs to endorse her as next President of the European Commission.

Mr Van Orden told her: “I am disappointed that all you seem to offer is extension of our withdrawal date. This is not ambitious enough.

“We suggest you use your influence before you take office to urge amendment or reinterpretation of those aspects of the Withdrawal Agreement that are clearly unacceptable to the UK. This would not take a lot, solutions are there. In Europe, as they say, nothing is possible and everything is possible.

“Once you take office, we hope you will live up to your words and bring about a positive, mutually acceptable, rapport with the UK. This is in all our interests.

“Britain will leave the EU on 31 October. Let’s ensure this is on good terms, without acrimony, to provide the basis for a strong positive relationship in the future, fully respectful of the expressed desire of the British people for control of their own borders and their own laws.”