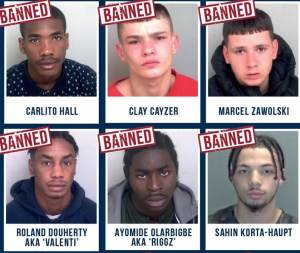 THREE more members of a drug-dealing gang, which has been linked to a series of violent incidents and anti-social behaviour in Thurrock, have been made the subject of a strict injunction.

Clay Cayzer, 18, of Albermarle Close, Grays, Marcel Zawolski, 18 of Dell Road, Grays and a 16-year-old boy who cannot be named for legal reasons, have been made the subject of the tough order following a hearing at Basildon Youth Court.

The injunction, and those granted previously, were brought about following partnership work between Essex Police’s West Operation Raptor team, Thurrock Borough Council and brave members of the community.

The gang, who refer to themselves as “C17”, first came to the attention of the Operation Raptor team in May 2017 as they became heavily involved in drug dealing and violence.

Under the latest injunction the teenagers have been made the subject of tough restrictions including being banned from loitering in Grays town centre. They are also banned from making drill videos, associating with other members of the C17 gang and they must give Essex Police all details of their social media profiles.
The order was secured following joint work between Essex Police, Thurrock Borough Council and the community to gather the evidence to put before the court.

A total of 11 gang members have now been made subject of the order.

Following the latest injunction hearing Sgt Scott Fitzmaurice of the West Operation Raptor team said: “We are committed to protecting our communities from gangs who not only attempt to sell drugs on our streets, but also exploit the vulnerable and perpetrate violence, crime and disorder.

“This latest round of injunctions against members of the C17 gang shows that not only we will continue to target this gang but we will also take preventative steps to prevent the further exploitation of younger members who have been lured into a lifestyle with the promise of reward but in reality face the threat of violence if they don’t do as they are told.

“Essex Police, our partners at Thurrock Borough Council, residents and businesses are not prepared to put up with C17 and that is why we have come together to provide the evidence to seek a hard-hitting injunction that bans them from the parts of our community they have blighted.”

Leader of Thurrock Council, Cllr Rob Gledhill said: “The strict injunction against members of the C17 gang has already been very effective in tackling those who commit these terrible crimes, including selling drugs, committing violent assaults and preying on young and vulnerable people.

“We are not complacent and are continuing to work very closely with our partners, including Essex Police, to protect our communities and help our residents feel safer.

“I am therefore very pleased to see the injunction being imposed on further gang members and strong action also being taken against those who breach it.”

The latest injunction also comes as one of the gang, 20-year-old Carlito Hall of Lewis Avenue, Walthamstow, was jailed for 49 days for breaching his injunction.

Hall was arrested on June 24 for breaching his injunction after he was found on a pedal cycle in a public place with three or more people, both of which he is prevented from doing by his injunction. He was jailed for 49 days at Chelmsford Magistrates’ Court on Thursday 11 July.

Violence around C17 is mainly borne out of rivalry with other gangs and drug lines and the escalation in violence with rival gangs has played out in numerous so-called ‘drill’ music videos filmed by members of C17 which feature weapons and provocative language and gestures.

Drill is a type of rap music that originated in South Chicago in America. It features dark, violent lyrics and is often used to perpetuate and even escalate gang disputes.

The latest injunction was granted at Basildon Youth Court on Tuesday 9 July.