Return of the Tilbury Carnival is a great success 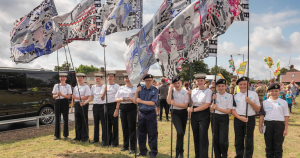 THE RETURN OF THE TILBURY CARNIVAL IS A SUCCESS FOR COMMUNITY

A DAY of celebration was held in Tilbury at the weekend (Saturday 20 July) as the Tilbury Carnival returned for the local community. The celebrations and family fun began with a parade of more than 400 people started by Chairman of the Tilbury on the Thames Trust, Stuart Wallace; local MP, Jackie Doyle-Price; and Tilbury’s infamous 17ft tall ‘Tilbury Docker’ puppet.

The carnival procession wound its way through the streets of the town – which were lined with hundreds of people – in a glorious parade of music, dance, spectacular larger than life puppets and beautiful silk flags. The parade was choregraphed, designed and created by carnival specialists Ali Pretty and Jeanefer Jean Charles with local people. 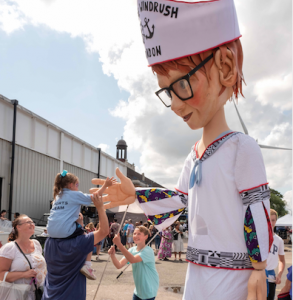 Led by Tilbury on the Thames Trust, the Carnival was inspired by the local heritage of the area and the importance of the arrival of the Empire Windrush in Tilbury in 1948. The project engaged with local schools in Tilbury and residents in a programme of educational workshops which culminated in a celebratory Carnival on Saturday.

The set of thirty flags were created and used in the parade, depicting illustrations inspired by the story of the Windrush. Some of the flags depict the journey and arrival of the Empire Windrush bringing the first group of Caribbean people to settle in the UK, including the famous calypsonian Lord Kitchener. The flags were created by Kinetika in collaboration with local community members from a wide range of Tilbury organisations, including One Community Trust, Gateway Academy, and Kite Spirit textile group.

Stuart Wallace, Chair of TTT: “We had a brilliant time at Tilbury Carnival 2019 this weekend. It was a day of celebrations and there was a great community spirit throughout the event. We had hundreds of local volunteers helping us with the Carnival as well as hundreds more taking part in the parade and coming along on the day to join in the fun. We wanted to build on the success of the parade and Windrush celebrations last year and we certainly achieved this. My thanks to everyone involved, to those who came along on the day and to our funders.”

Commenting on the carnival, Jackie Doyle Price MP said: “It was wonderful to start the parade for Tilbury Carnival on Saturday. What a glorious celebration it was and it was great to see the community of Tilbury coming together to enjoy the day. I am very proud of the role that Tilbury has played in our nation’s history. Carnival is a fantastic way of celebrating our connection with Windrush.”

Carnival expert Ali Pretty said ‘It has been fantastic to see so many people getting involved to create carnival this year. It has really brought people together to celebrate all that unites us and to remember our history and all that has come from the rich cultural legacy from the arrival of Windrush.’

Cllr Deborah Huelin, Thurrock Council’s Cabinet Member for Central Services and Communities, said: “We’re delighted to have supported the Tilbury Carnival alongside other organisers including the Port of Tilbury, Tilbury Riverside Project, Tilbury-on-the-Thames Trust, One Community Development Trust and Kinetika. This exciting spectacle was enjoyed by Thurrock residents and visitors from outside the borough who wanted to see what the carnival was all about.

“This project was inspired by the role that Tilbury played with the Empire Windrush, which docked at the Port of Tilbury on 22 June 1948, as well as the legacy and outstanding contributions of the Windrush generation and their descendants. It is vital that we encourage our communities to mark Windrush Day and recognise the contribution that migrants from all ethnicities and backgrounds have had on modern Britain. As the Thurrock motto says ‘By Thames To All People of the World.’

“Thurrock Council was also one of 50 community groups and local authorities across England this year to benefit from an initiative from the Ministry of Housing, Communities and Local Government, and received a share of a £500,000 grant to commemorate Windrush Day.”

The event was led by Tilbury on the Thames Trust and funding was secured through the Windrush Day Fund which awarded £20,000 for the carnival, complementing the funding of £10,000 from the Port of Tilbury; £5,000 from Thurrock Council; and a crucial £30,000 from Arts Council England.

TTT was also involved on 6 July in a carnival exchange with Norwich, one of England’s oldest running carnival processions – the Lord Mayor’s Procession.

For information on the carnival please go to: www.tilburycarnival.tott.org.uk