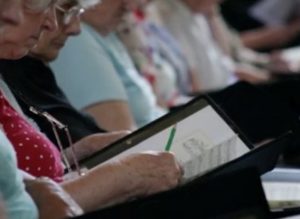 NOT long ago I described a performance by Thurrock Choral Society as “a concert with a difference”, but their recent Summer Concert, given at Thameside School in Grays, had an even greater difference, combining, as it did, twentieth century English choral and chamber music with traditional music of Indonesia, complete with a small gamelan orchestra. The event was a quite unusual achievement.

There can be few “classical” conductors who do not aspire to direct the extraordinarily beautiful Serenade to Music by Vaughan Williams, which opened tonight’s programme, under the direction of the Society’s Musical Director. Elspeth Wilkes. First performed in 1938 as a tribute to the conductor Sir Henry Wood, founder of The Proms, on the Fiftieth Anniversary of his first concert, the Serenade was originally composed for sixteen named singers with orchestral accompaniment, but the composer acknowledged that in subsequent performances the vocal parts could be taken by four soloists and chorus, and it was this version which was performed tonight, with instrumental accompaniment from the London-based Bridgetower Ensemble: James Widden (violin), Alison Holford (cello) and Varia Doletskaya (piano), the latter substituting for Elspeth, the Ensemble’s regular pianist, when she was conducting.

Paradoxically, choral versions of the Serenade tend to work best with a rather large choir, comfortably able to divide into multiple parts, and the Choral Society do not currently have a huge membership, but considerable ingenuity had clearly gone into adapting the score to the forces available, and, although in some passages a richer choral sound might have been desired, this was a truly moving performance.

The text of this evocative work comes from Shakespeare’s The Merchant of Venice, and a copy of the text was thoughtfully provided for each audience member.

To conclude the first half of the concert, the Bridgetower Trio played three Miniatures for Piano Trio by Frank Bridge. Bridge is perhaps best known as the teacher of Benjamin Britten, but he was himself a prolific and successful composer, and these pieces gave us an enjoyable sample of his music, rather suitable for a summer’s day.

The music which opened the second half was extraordinary and fascinating. The “gong-chime” orchestras of Indonesia, known as gamelan, with their rhythmically complex and melodically distinctive music, have influenced a number of Western composers, including Debussy and Britten, and tonight the Choral Society were joined by members of the Jagat Gamelan group, sponsored by the London Embassy of the Republic of Indonesia.

Gamelan performances are traditionally directed by a drummer at the front of the group, and, to begin this section of the programme, Sarah Stuchfield, an expert in Indonesian music, directed a selection of gamelan songs from Bali and Java, with vocal parts for the chorus, after which Manuel Jiménez directed the choir in an unaccompanied performance of the traditional Balinese musical play “Monkey Chant”, in which the Society’s Chairman Sandra Wilkes was vocal soloist.

I doubt that any members of the Society had sung Indonesian music before, but they coped extraordinarily well with tricky rhythms and a very unfamiliar language, conveying an infectious enjoyment of the pieces. Bravo!

Tricky rhythms of a different kind characterize Bob Chilcott’s Little Jazz Mass, which ended the concert. Originally composed for upper voices, and first performed in 2004, this is, as the title suggests, an upbeat concert setting of the missa brevis (Kyrie, Gloria, Sanctus, Benedictus and Agnus Dei) by the much-admired former Cambridge chorister and King’s Singer. It can be performed with a jazz “combo”, but on this occasion was well accompanied by piano and cello.

Again, the reinforced chorus rose successfully to the demands of the music, highlights including the soaring sopranos in the Kyrie, the well-articulated syncopations of the Gloria, and the beautifully sung opening of the “Gently rocking” Sanctus. Dynamics were effectively observed throughout.

Congratulations, then, to the Society and its Musical Director – but why was the audience so small?
Perhaps a bigger effort with advertising is called for.

Thurrock Choral Society’s Christmas Concert is again at Thameside School at 5.30pm on Sunday 8th December 2019 when the seasonal programme will include the Vivaldi Gloria.