DOTING father and husband Richard Puffett was 65 years old when he passed away from a rare form of lung cancer. Here, his wife Sharon and daughter Charlotte share his story and are encouraging others to join them in supporting the Hospice. 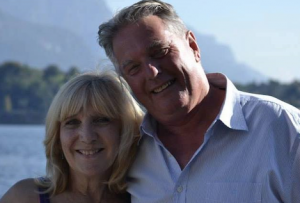 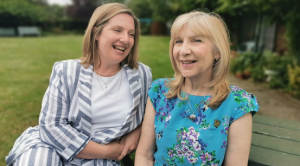 Richard grew up in Basildon, just a stone’s throw away from St. Luke’s Hospice. He met Sharon in 1969 and they married in 1972. The couple had a local business running a sweet stall at funfairs and events. They had three children – Charlotte, Paul and Brett – and welcomed to the world four grandchildren.

In December 2016, Richard was diagnosed with a rare form of lung cancer. Sharon recalls: “We were all in shock and devastated but Richard was so positive. He was always very stoic and practical and just told us that he would do everything he could to beat it.

“He had treatments including chemotherapy and even took part in a trial at Barts Hospital in London. It was a real struggle to get to the trial each week but Richard was adamant that if he couldn’t help himself, he wanted to help others. That was Richard through and through.”

Coming to the Hospice

Richard received care at home and began visiting St. Luke’s Hospice when he needed help steadying his condition. He was a loyal supporter of the Hospice, having watched as it was built on the field he used to play at as a young boy. So when his condition deteriorated, he knew that’s where he wanted to go and he was admitted to the In-Patient Unit in May 2017.

Charlotte says: “Dad wasn’t worried about going to a hospice but I was. The first time I went to see him I had a knot in my stomach and it took every ounce of energy for me to walk through the door. But honestly, the moment I walked in all my worries vanished instantly. It was nothing like I thought it would be. Nothing was too much trouble for the nurses and they were fantastic with my daughter Ellie, who was three at the time.”

Richard spent five weeks in the In-Patient Unit at the Hospice before passing away on the 28th June 2017. The night before he died, the whole family was by his bedside.

Charlotte says: “We ended up spending a lot of time at the Hospice and were able to just enjoy time with Dad. I remember one summer’s night we had the doors to the garden open, there was a lovely breeze in the room, and we were sipping on Bailey’s coffee, Beatles music playing. It’s a special moment I’ll always remember.”

It’s the memories Sharon and Charlotte have of the Hospice and the gratitude they feel that has led to them becoming part of the St. Luke’s Hospice family. Sharon began volunteering in the In-Patient Unit in August 2018, the very unit where Richard was cared for. And in September 2018, Charlotte joined as an Administrator.

“It’s amazing how everyone still remembers him,” says Sharon. “Richard was our world so it’s hugely comforting being here and I feel close to him. The Hospice took away the stress of being a carer and let me be a wife and mum again. He’d always say how privileged he was to be cared for by St. Luke’s Hospice and that love surrounded him here.”

Charlotte says: “I still get a warm, welcoming feeling when I walk through the In-Patient Unit. I’m so happy I can work here and feel part of the Hospice for Dad.”

After Richard died, Charlotte turned to counselling support offered by the Hospice. She recalls: “When Dad died I didn’t have time to prioritise myself; I had the kids and the rest of the family to think about. I was just getting by each day, doing what needed to be done, but in reality I wasn’t coping. Counselling gave me the time I needed to focus on me and how I really felt. It made me face up to reality however hard that was, which played a huge part in my recovery.”

Sharon said: “What I’ll take from our experience at the Hospice is that it does so much more than what people think. It’s not just a place you come to die, it’s a place where you can live all the days you have left. We’ve found comfort, help, support and even friendship here. It wasn’t just a relief for Richard but for our whole family.”

Sharon and Charlotte are supporting the St. Luke’s Hospice Summer Sunflower Raffle this year. Money raised from the raffle helps the Hospice fund vital services for people in the communities of Basildon and Thurrock with a life-limiting illness or at the end of life.

There’s a chance of winning one of three cash prizes, including the top prize of £1000.

Each ticket costs just £1. There are 10 tickets to a book, meaning each book sold will raise £10 for the Hospice; that could pay for essential clinical supplies for a patient, like Richard, on the Hospice In-Patient Unit for almost two days.

Tickets are available to purchase from the Hospice, its charity shops, or from the Fundraising Team. To find out more about the Summer Raffle, contact St. Luke’s Hospice on 01268 272292, email donate@stlukeshospice.co.uk or visit stlukeshospice.com/summer-raffle.

The draw will take place on Friday 30th August. Full terms and conditions can be found at www.stlukeshospice.com