FAMILY and friends of a Grays man injured in a machete attack in East London whilst serving as a police officer have set up a fund-raising page.

PC Stuart Outten, 28, was stabbed in the head as he tried to stop a van suspected of having no insurance in Leyton, east London, in the early hours of Thursday.

The Met Police officer Tasered his assailant despite receiving multiple stab wounds to his head and body.

Muhammad Rodwan, 56, of Luton, is charged with attempted murder and possessing an offensive weapon.
He is due to appear at the Old Bailey on 6 September. 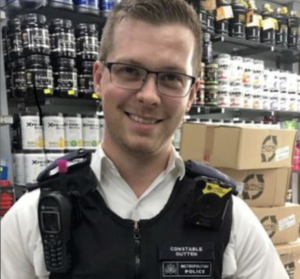 “Firstly i would like to take the oppertunity to thank each of you for taking the time to read this story and for those who have donated huge appriciation from all of us. As a serving metropolitan police officer, when one of us gets hurt it upsets us all. We would like to get behind our friend, and colleague and help him in his long process to recovery.

PC Stuart Outten turned up for work for a typical night shift on a busy London borough on 7th August 2019. At around midnight PC Outten, along with a female colleague have attempted to stop a vehicle which it is believed was driving with no insurance. The driver has got out of the vehicle and began to attack Pc Outten with a large knife. PC Outten has bravely fought off the attacker but not before substaining several deep laserations to his head and hands. Stuart was rushed to a London hospital where he was looked after by the amazing staff. He underwent surgery shortly after he arrived due to the injuries from the attack. He is currently being looked after by his supportive family and friends as well as his extended police family.

PC Outten is expected to make a full recovery which is amazing but we all need to support him further as sometimes those ‘invisible’ scars that the rest of us can not see take much longer to heal.

On behalf of the Metropolitan Police Service, i would just like to say we are proud of you! We all wish you a speedy recovery and are here for you whatever you may need along the way! #hero’sdontalwayswearcapes

“All money raised will go directly to PC Outten to spend as he wishes”.

The link is here
https://www.justgiving.com/crowdfunding/pcstuartoutten?fbclid=IwAR2PC1-o4S1R7GUWwzuaSnG6_e4KJk8ZXRqlkifY0EMwOcMbqaeEgPhTHOo