THURROCK Council’s plan to expand the civic offices was labelled ‘horrible’ and ‘excessive’ during a planning meeting that saw the controversial development rejected by councillors. 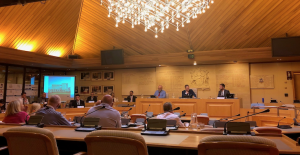 The rejection was led by Labour Councillor Gerard Rice, who gained support from five of the nine members on the committee despite the council’s planning team saying planning permission should be granted because the public benefit outweighs any problems.

Mr Rice said: “I look at this and I am told this is progress. But that building looks like a big carbuncle. It looks horrible.

“To detract away from that you have the Grade 2 listed church opposite. It is hardly trying to bring the area into harmony. It will look totally out of place and the mass of it is quite significant.”

He went on to call it an “excessive” development that “doesn’t complement anything”.

Councillor Gary Byrne, of the Thurrock Independents, backed Mr Rice’s comments saying that the proposed building looked like “the sort of Lego building one of my grandchildren would make”.

An agent speaking on behalf of the developer defended the plans claiming there has been “extensive consultation” about the scheme and promised it would “reinvigorate the south end of the High Street”.

When he was asked how it would reinvigorate the area, he explained that it is not accurate to label it an office building because over 50 per cent of it would be “open to community use”.

He said: “The ground floor would primarily be a community hub, multi-use, lots of uses within that, primarily members of the public interacting with the council but there is also the café which can be used for mobile working and for studying, as well as an opportunity for temporary exhibitions.

“On the first floor we have the committee rooms which will be used in their first instance for meetings which may or may not be open but they are designed in such a way that they are completely flexible so that can be booked by members of the public. The same can be said of the chamber.”

Councillor Martin Kerin spoke on behalf of residents in Grays and said if the scheme goes ahead it would “remove the last, legible vestiges of the historic character of the High Street” and loom over the residents of the nearby Pullman Court “leading to a complete lack of privacy”.

He added that it also threatens to “decimate” at least half of the independent businesses located at the southern end of the High Street.

“Our independent commercial businesses deserve our support – they shouldn’t be run out of town,” he said.

As the vote to reject the plans went against the advice of Thurrock’s planning team, officers will have to review the plans again and bring them back to a future planning meeting when they will be considered for a second time.

The second consideration will come after council leaders discuss a motion to abandon the plans entirely, which the majority of councillors voted in favour of at the end of June.

The growing cost to the taxpayer

One of the most controversial aspects of the Civic Centre plans has been the cost which is estimated to be £9.78million.

Despite facing constant setbacks and failing to obtain planning permission, half a million pounds from this budget has already been spent on “concept designs” and “surveys and architectural work”.

If the plans were to be scrapped this money will be lost, as well as an undisclosed sum that will have to be paid in compensation to a contractor.

Furthermore, the council has already purchased five properties which will be demolished to make way for the extension to the civic offices but the council has refused to reveal how much they paid for them.

When the information was requested through a freedom of information request the council failed to state the reasons for withholding this information beyond claiming it is “commercially sensitive”.

They also failed to say whether a required public interest test had been carried out before refusing the information.

One detail that was confirmed was that the money came from the council’s capital budget set aside for the wider Grays regeneration project, indicating the purchases are likely to be in addition to the £9.78million cost of the offices.

It is not clear what will happen to these properties if the plans are scrapped.

Of the £9.78million budget, £4.8million was set aside by the previous Labour administration and was initially intended for a full refurbishment of the existing building.

The rest of the money is expected to come from a combination of the council’s capital budget and income generated by the sale of a section of the existing building as part of the redevelopment.