Athletics: Thurrock Harriers season is heading to the final 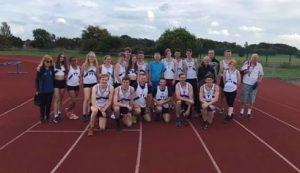 EXCITEMENT all round as the season approaches its close at Thurrock Harriers for both the Youth and Senior teams.

Saturday (18th) saw Thurrock seniors host the fifth and final match the season for the Southern Athletics League (SAL). With great performances and team work they not only won on the day but gained a well earned promotion.

The previous Sunday (11th) the club competed in Eastern Young Athletes League (EYAL) at St Albans. They may have come third on the day but their determination and hard work gained all important points to take them through to the final. This is a fantastic achievement for the club and it’s coaches; for their younger athletes (11 -16yr old) athletes to come in the top six clubs (there are 25 clubs across Essex, Herts, Beds, Cambridgeshire and Suffolk competing throughout the year) to compete for the cup.