More than 70 new officers start their journey with Essex Police

ESSEX Police’s new recruits completed their training by proudly ‘passing out’ during a special ceremony surrounded by family and friends at our HQ in Chelmsford. 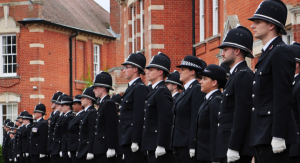 A police spokesperson said: “The 73 officers started their journeys in our Essex Police College and have been put through their paces over the last 18 weeks as they trained to become police constables. Their journey started in Chelmsford but it will take them across the county, as our officers are posted to our different stations to help keep Essex safe.

“At the ceremony, after pledging their commitment to serve the residents of Essex, they were welcomed into the force in front of their loved ones. Mr Harrington thanked the officers for all of their hard work during their training and welcomed them into the Essex Police family”.

Chief Constable Ben-Julian Harrington said: “It’s an honour for me to welcome and congratulate another 73 new police constables in to the Essex Police family.

“Their journey as police officers is just beginning and they have today sworn their oath to serve in front of their friends, family, police officer colleagues and honoured guests including in a first for the force, the Home Secretary.

“The passing out ceremony today is a celebration at the culmination of 18 weeks intensive training before they go out on patrol to serve our communities; helping people, keeping them safe and catching criminals.

“I am looking forward to hearing where their journeys take them.”

Together with chief officers, the officers thanked the trainers and staff for their support and hard work during their 18 weeks at Essex Police College.

Out of the 73 officers, nine of them have completed their training through the ‘Police Now’ graduate programme. The officers have taken an alternative course to those who come through our Essex Police College. ‘Police Now’ works in partnership with more than 30 police forces across England and Wales to attract, train and develop outstanding graduates to become inspirational police officers.

During their training, the officers were split into four intakes, L1, L2, L3 and L4. As part of their training course to become police constables, they held fundraising events for their chosen charities.

Intake L1 chose to raise money for ‘Kids inspire’ dedicated to providing disadvantaged young people, their parents and young carers (siblings) a bespoke service package consisting of individual therapy. They raised £2,648.95 and presented a cheque to a representative of the charity.

Intake L2 chose to raise money for ‘Help for Heroes’ dedicated to providing lifetime support for the armed forces community and their families. The students raised £2,640 and presented a cheque to a representative of the charity.

Intake L3 chose to raise money for ‘Open Road SOS buses’ dedicated to operating SOS bus services in Colchester High Street and Chelmsford City Centre. Their specially adapted buses are on site at weekends to provide a safe haven and medical support to people who need it. They raised £1,200 and presented a cheque to a representative of the charity.

Intake L4 chose to raise money for ‘Essex & Herts Air Ambulance’ who’s aim is to save lives, reduce or prevent disability, or suffering from critical illness and injury, by delivering a pre-hospital emergency medical service to the people of Essex, Hertfordshire and surrounding areas.. They raised £2,193.50 and presented a cheque to a representative of the charity.

The final award, The Kirste Snellgrove Student Officer award, was won by PC Thomas Semple. The award was introduced in June 2012 to celebrate the achievements of an exceptional student in each intake, in honour of our late Essex Police Training Sgt Kirste Snellgrove who sadly passed away at the beginning 2012 after a long challenge with cancer. This award represents all the core values and behaviours of a Police Constable, which Kirste herself not only practiced but tried to instil in her students