Poll suggests Labour could take Thurrock at next General Election 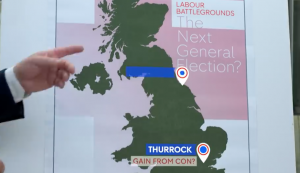 A POLL OF 19,000 plus voters has indicated that Labour could take Thurrock from the Conservatives in a General Election.

Details of the poll were published on Channel 4 news on Tuesday night. The poll indicated that overall, the Conservatives and Labour’s percentage share would drop by ten points, with the Lib-Dems and the Brexit Party gaining.

The poll by FocalData highlighted that there could be a number of swings. The Lib-Dems could take Lewes, the Conservatives could gain Ashfield and Labour could take Thurrock.

The seat is held by Jackie Doyle-Price with a majority of 345. The Labour candidate is former leader of Thurrock Council, John Kent. It looks like it could be a fascinating battle.

As yet there isn’t a Brexit Party candidate (and yes, we do know the rumour).

The whole news item is below.