TWO men have been disqualified from driving after quickly being stopped by a Town Centre Team officer in Stanford-le-Hope.

Mark Cook, 48, of Victoria Road, Stanford-le-Hope, was banned from driving for 24 months, and was ordered to pay a £230 fine at Basildon Magistrates’ Court on Thursday 5 September.

Darren Grant, 39, of King Street, Stanford-le-Hope, was given a 20 month ban from driving at the same court on Monday 2 September and was fined £692 for driving under the influence of drink.

On Thursday 7 July, Mark Cook called us to say that there was an obstruction outside his home and PC Stuart Mackinnon from Stanford-le-Hope’s Town Centre Team attended while on patrol.

Cook arrived at the scene in his car minutes later before becoming abusive to PC Mackinnon, who quickly established that his breath smelt like alcohol and his words were slurred.

A reading in custody found he was four times over the drink drive limit.

On Saturday 27 July, PC Mackinnon activated his body-worn camera after Darren Grant was seen using his phone behind the wheel of his car in London Road.

Grant also smelt like alcohol and a reading showed he was three times over the drink drive limit.

Sergeant Ben Forbes, who leads the Thurrock Town Centre Teams, said: “These results are thanks to the dedication and commitment of our Thurrock Town Centre in delivering a proactive high visibility presence within our three town centres, with Stanford-le-Hope being one of them. 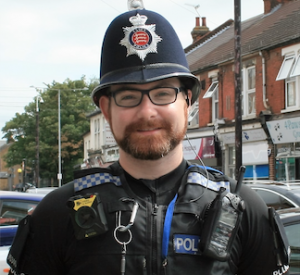 “As promised when we launched in July, your Town Centre Team are absolutely committed to removing any risk of harm or violence and making our town centres a safer place.

“Following these two arrests and successfully convictions, which have been possible thanks to PC MacKinnon’s proactive policing, we have now prevented these drivers from causing a risk to public safety whilst they remain disqualified.

“My plea to the public is if you are thinking of drinking and driving, then don’t as you will be prosecuted and if you suspect someone of drink driving, then please make sure you call police.

“The support from the public has been absolutely amazing and I thank every person who has approached me, my team and contacted us so far.

“We all look forward to the future and my vision for the next few months is to further build upon our success and to continue to make a successful impact within our town centres.”

Councillor Rob Gledhill, leader of Thurrock Council, said: “It is fantastic to see the Thurrock Town Centre Teams having such an impact already and these prosecutions should reassure our residents that we and Essex Police take crime and anti-social behaviour seriously and that we will come down with the full force of the law on anyone committing offences in our borough.

“These seven new officers of the town centre team are a welcome presence on our streets and a visible deterrent to anyone thinking of committing crime in Thurrock.

“I would like to offer my thanks to PC Stuart Mackinnon for the diligence he has shown in arresting these two men and ensuring they faced justice and a lengthy driving ban instead of recklessly getting behind the wheel after drinking.”