THE Essex Rocks and the Sussex Rocks went head to head at Rookery Hill, and it was John Coventry’s Essex boys who came out comfortable victors.

It was refreshing for once to see two sides looking to get the ball down and play on the deck, and while East Thurrock enjoyed the lions share of the early possession, Bognor also showed some excellent touches. 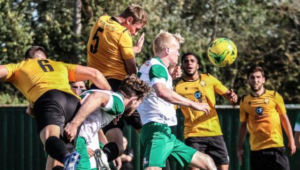 East Thurrock took the lead on the half hour when a neat through ball from Ryan Scott, sent Danny Harris clear to neatly lob visiting keeper Petar Durin.

The Essex Rocks doubled their lead five minutes before half time, as Bognor paid the price for trying to be too clever in front of goal. Morisi Gelashvili pressed as a defender looked to pick out a pass, and forced an error, leaving the industrious Ayo Olukoga to smash the loose ball into the net.

Ten minutes into the second half and East Thurrock scored their third. A great piece of skill from skipper Ryan Scott on the halfway line sent Alex Clark away down the right, and his clever low cross was touched in by Steve Sheehan.

To be fair to Bognor, they stuck by their footballing guns, but just to prove it wasn’t going to be their day, they were denied even a consolation when, after being awarded a penalty in the closing minutes, Dan Smith smashed his spot kick onto the post.

John Coventry will be delighted to have won so comprehensively, with five of his key players on the injury list and watching from the stands.