THE heat of battle matched the heat of the day in this enthralling encounter between these two well matched teams. Soham contributed to a pulsating ninety minutes coming from behind to lead with thirty minutes remaining. It looked like the visitors would snatch a win but sensing Rangers were tiring Blues late rally claimed the points with ace marksman Tony Stokes snatching the winner. The win keeps Blues in the play off places maintaining pressure on teams above them. Lewis Clark capped his debut in a Blues shirt with the second goal making a solid debut after a shaky start. The measure of Blues improvement under Jim Cooper is their ability to grind out results when not at their absolute best and remaining competitive to the final whistle. 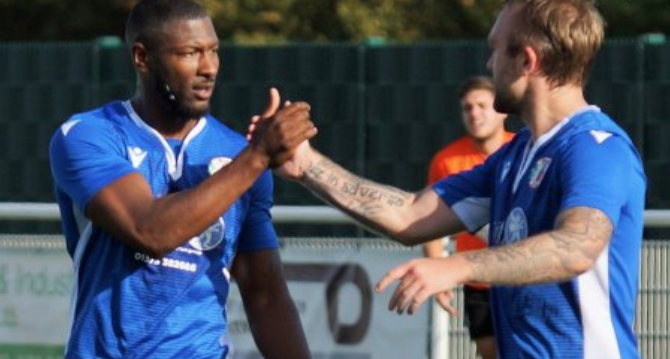 It was Soham who threatened early on when Matty Allen broke clear, racing into the box his shot blazed over. Blues rallied getting into their stride, an exchange of passes set up an opportunity for Mitch Hahn usually so accurate from outside the box, but this time Josh Pope comfortably gathered his effort.

Blues looked increasingly dangerous in the opening period and with thirteen minutes on the clock they edged in front and what a goal it was. Macauley Joynes and Stokes combined well to set Joao Carlos free, breaking into the box he unleashed an unstoppable drive rocketing past a startled and beaten Pope.

A goal to the good Blues settled back allowing Soham to push forward, they looked lively and dangerous at times but came up against a determined home rearguard marshalled by Steve King, and Danny Sambridge in sparkling form between the sticks. Sambridge proved his worth plunging to his left to turn a Ryan Auger free kick behind. The Blues goal had another close call when a searching ball just evaded the unmarked Ally Conway.

Manny Ogunrinde came close to a second for Blues after being played in by Carlos – his close range effort briliantly turned over by Pope. That save inspired the visitors, who got back on level terms on 36 minutes through Matty Allen left free in the box slotting past Sambridge. They could have gone in front when a slip by Clark presented an opening for Tom Newman – wasted when he failed to hit the target.

With half time looming the game was finely balanced played out in midfield with neither side able to establish an advantage.

Looking sharper after the restart Blues won an early corner when Carlos was denied from close range – a short corner found the head of Nathan Fox who nodded over. Soham had enjoyed time on the ball in the first period, now Blues pressed higher denying them space and seeing more of the ball, but they were dealt a sucker punch on the hour mark.

Soham’s Lewis Clayton picked up the ball deep in his own half – running close to sixty yards without a Blues player getting in a meaningful challenge he moved into the box squared the ball to Andrews unmarked six yards out presenting him with a simple tap in leaving Cooper incandescent on the touchline. The goal was another example of Blues gifting goals to the opposition

Momentarily unsettled Blues rhythm and fluidity deserted them, although engineering openings the quality of final ball was found wanting, coupled with Rangers determined defending – it looked increasingly like the visitors would come away with the points. Jim Cooper though made a crucial substitution replacing Manny Ogunrinde with Stan Muguo on 70 minutes allowing Hahn to push further forward.

The change injected momentum, Blues quickly capitalised minutes later when a Fox ball into the box caused confusion amongst the visitors defenders allowing Clark to bundle the ball past Pope. If the first Blues goal was a work of art this second was more basic in construction but nevertheless crucial to the outcome.

Now level and with their tails up and Soham looking shaky Blues went for the jugular. Just two minutes after levelling Carlos broke free fed Stokes who although pushed wide managed to get his shot away sliding under Pope into the bottom corner from an acute angle to register his fifth league goal of the season.

Soham’s early exertions had clearly taken its toll visibly tiring Blues superior fitness asserted itself as they pressed for a fourth goal, Steve King came close nodding over from a Fox cross . A late injury time flurry by the visitors caused anxious moments for Blues fans , Allen coming close heading over but the final whistle quickly followed to end an entertaining game.