ON Saturday 21 September the talented youngsters of Thurrock Marching Brass, with an average age of just over 11 years, travelled to the Select Stadium in Widnes, Lancashire and competed in the Junior Class at the Drum Corps United Kingdom (www.dcuk.org.uk) 2019 British Championship Finals.

Performing their 2019 production, “Apollo”, which is a celebration of 50 years since the first moon landing, Thurrock’s premier marching and performing arts team beat off five times British Champions from Sheffield, Concord Allstars to take the top honours and to bring back to Thurrock their fourth British Championship title since launching for youngsters in the Thurrock and surrounding areas on October 18 2010.

Caption awards for the Junior Class Championships were also adjudicated by eight separate judges and each also secures a British Champions status for the relevant sections of the performance and were awarded as follows:-

With the first clean sweep in all caption awards at this level for quite some time, this was an emphatic display of precision performance and music presentation from these incredibly talented youngsters.

In addition to the main competition on the day, there was also a side line fun challenge called Drumline Battle, in which the percussion sections from bands across the country and all ages challenge each other to a drum off with each having 2 rounds to out perform the other. Seven entrants made it to championships and a preliminary round, semi finals round and then the ultimate drum off in the final round between the last two standing took place to determine the winners overall of the 2019 Drumline Battle. 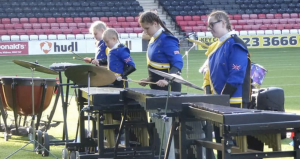 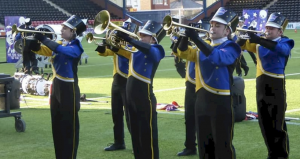 The percussion section of Thurrock Marching Brass, who compete separately under the name Drumsound45, took on open age competitors in the Preliminary round and progressed to the Semi Finals, where they face one of the top two drumlines in the country. The fun and entertaining package presented by our very own Drumsound45, which included a really exciting blind folded presentation of multi drums just edged them into the Finals, and a showdown with arch rivals Concord Allstars. By the narrowest of margins, the victors on the night were Concord Allstars, but there is no doubt at all that both our own Drumsound45 and Concord Allstars were deserved finalists, and each had the crowd on their feet wanting more.

Speaking of the achievements, Corps Director, David Friend commented “I hear all the time that our young people don’t have anything to do with their time, and I listen to parents who are frustrated that their children are bored and need something to do with their time that is both fulfilling and rewarding, but also gives them a sense of purpose and belonging while having a great deal of fun with kids their own age. Well all I can say is come check Thurrock Marching Brass out, as we have demonstrated once more that with the right amount of guidance, love, and first class instruction, any youngster can achieve the very highest of successes regardless of age. Bringing home a British Championship and under such friendly but fierce competition in the manner that we have done this year speaks volumes to my incredible staff, our support staff and as important the parents that also come along to surround our kids with guidance. Getting a clean sweep in all captions at this level is all but unheard of, but this year the name of Thurrock is flying high and proud right now as the kids have done just that! Add to this the unbelievably entertaining drum line, which we call Drumsound45, and I don’t think that this weekend or the achievements could have been any better. Thurrock should be proud of everyone involved in Thurrock Marching Brass right now and as I and we pride ourselves on being an integral part of the community, to me and to us, this is a community success and so thank you all for your kind words of encouragement, your support of our youngsters and for your help in whatever way you provide it”

Adding to this Chairman, Paul Morgan said “For once I am a little speechless (and for those that know me know that is a very rare thing indeed) but I and the entire board couldn’t be any prouder of David and the corps achievements this weekend. It is a stunning result and he and his fantastic team of instructors, helpers and parents have developed a program that has truly showcased all that the youngsters of Thurrock and the surrounding areas are really capable of. This is the fourth British Championship title that TMB has brought back to Thurrock, the last being at Cadet level in 2016 and to do it in the manner in which they have done was just so impressive, Everyone on the marching and performing arts circuit is talking about Thurrock right now, not just locally but also globally. Putting this great borough firmly on the map for excellence once again. Congratulations David, and your dedicated team around you, but most of all COONGRATULATIONS KIDS…. YOU DID IT!!!!!”

Anyone wanting to get involved please feel free to contact us at info@thurrockmarchingbrass.org or via the contact us page on our web site at www.thurrockmarchingbrass.org and we take youngsters on board from between 6 and 16 primarily with a four week free try out period. No experience at all is necessary and we provide all the instrumentation, uniforms and tuition in four different areas of Static Percussion, Marching Percussion, Brass and Colourguard (dance) which are both stand alone and also combined together in productions that we perform locally and around the country.