Thurrock’s Lib Dem candidate: “Numbers don’t add up for Corbyn to be PM”

The Liberal Democrats are serious about removing Boris Johnson from 10 Downing Street, this is why we will never back Jeremy Corbyn for Prime Minister.

Any conversation about an emergency Government should now focus on uniting behind a candidate who can command support in Parliament. Jeremy Corbyn should put the national interest first and make clear who he is willing to support in the event a candidate is needed. 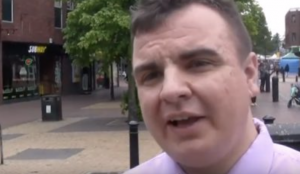 Kevin McNamara, Liberal Democrat parliamentary candidate for Thurrock, said:
“There is no majority in Parliament to make Jeremy Corbyn an interim Prime Minister. The ball is now very clearly in Jeremy Corbyn’s court on this. He needs to put the national interest first and make clear who he would support.

The real question is for Labour’s candidate in Thurrock – does he agree with me that Corbyn should move aside for a credible candidate, or is he comfortable with the most unpopular opposition leader in history enabling a no deal Brexit?”

One Response to "Thurrock’s Lib Dem candidate: “Numbers don’t add up for Corbyn to be PM”"