ESSEX Firefighters were called to the scene of a fire at a three storey townhouse in Seymour Road, Tilbury this afternoon.

On arrival, crews confirmed the property, which is part of a row of five, was completely on fire.

At 4.45pm, crews reported that they were working hard to contain the fire and prevent further damage to the neighbouring properties. 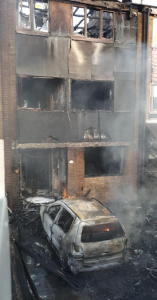 At 5.30pm, the officer in charge reported that the fire was under control. Crews are now extinguishing hotspots within the building.

At 6.30pm, the officer in charge advised that the fire was extinguished. Crews will remain at the scene for some time to monitor the area.

An investigation into the cause of the fire will take place in daylight hours, once the scene has fully cooled.