THURROCK entertained newly promoted Horsham at Oakfield on Saturday. The Sussex based team gained promotion via a play-off against Farnham and have made a splendid start to the season.

A bright start meant that Thurrock were awarded a penalty on half way, but some aerial gymnastics by Horsham kept the ball in play. Declan Nwachukwu sprinted across the field evading tackler after tackler before linking with Mike Watts ran in from half way anddived over near the corner. Centre Tom Johnson, added the extras. 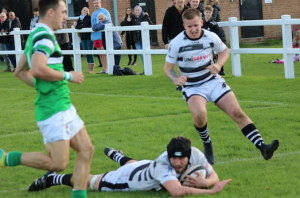 After an error-strewn period the ball reached former schoolboy International, Phill Ellis, who mesmerised the Horsham defence with a powerful sidestepping run which ended in his first try for Thurrock. Sam Stanley converted to level the scores.

Momentarily, Thurrock got on top and when Lewis Cross received the ball in space, he cut in hard off his left foot to land the home team’s second try and also his first try for Ts . With the conversion going wide, Thurrock went five ahead before Johnson reduced the lead with a fine penalty.

Horsham were awarded a penalty for a high tackle and elected to kick in to the corner. A clever line-out ploy saw locks Jonathan Goward andJack Osgood combine to set up No.8 Finlay Hillicks. Hillicks burst through the defence to restore Horsham’s lead. Moments later this lead was to be extended when the immmaculate Johnson hit a long range penalty. This was cancelled out when Sam Stanley kicked a penalty for Thurrock to reduce the arrears on the stroke of half-time with the score 15-20 in the visitors favour at the break.

With the crowd becoming more vociferous and restless, Horsham restarted the game.

The visitors extended their lead when Johnson continued his fine kick performance with a 3rd Penalty.

This setback seemed to spark a Thurrock revival as they scored a fine try, courtesy of an outstanding individual score from Tom Pool to bring Ts within 1 point. Sadly this was to be his last contribution as he was forced to retire with a bout of influenza. Sam Stanley converted.

This was Thurrock’s best period with Niall Clifford performing well again at Fullback and Joss Nunn coming to the fore. It would be the latter to score the next try and give Ts the lead for the 2nd time in the match. A move started by Nunn, saw him link with the ageless Chris Banks, making his 1st start in 2 years. From the breakdown, Nunn burst onto the ball and beat a defender to dive over and secure Thurrocks Bonus point try. Stanley again added the extra 2 points.

Again though, Horsham came back and another penalty from Johnson brought the visitors to within 3 points of Ts.

Thurrock came storming back and after a great bout of inter-passing, the brilliant Joss Nunn burst through to give the home team an eight point advantage with 7 minutes remaining.

With just 2 minutes left it looked as if Thurrock would be taking five points to climb the table. Then a quick line out ploy allowed Horsham a quick try and one last play! Thurrock looked “home and dry” as they kicked deep into opposition territory. However when star winger Nwachukwu got the ball deep inside his own 22, the defence seemed to freeze as defenders fell off the tackles. The powerful winger looked certain to score, however, Ts Skipper, Charlie Russo showed his own pace by making a desperate tackle. Not to be denied, the Horsham support arrived, recycled quick ball to score the unlikeliest winner through Redmayne!

Almost unbelievably, Horsham had picked up all five points in the”last play”. Sad for the Home side who had contributed to a highly entertaining game,but once again, had to take away the minor spoils with Horsham proving worthy winners in this topsy turvy match.

On a positive note; thanks to the outstanding work of Arran Shorter, this was the first match streamed live around the World from Oakfield. Make sure to subscribe to our YouTube channel to catch future games.