Investigation after cyclist attacked with substance in South Ockendon 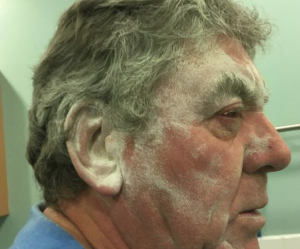 POLICE have launched a probe following what appears to be a random attack on a cyclist in South Ockendon.

Martin Kerin, 67, was was cycling on Stifford Road at 3.15am on Tuesday, 29 October when he was approached by a white car. Someone within the car then sprayed an unknown substance in his face.

Fortunately the substance proved not to be harmful.

Mr Kerin’s wife Elaine took to social media to try and find out more information about the attack.

She says: “At 3.20am this morning my 68-year-old husband was attacked in South Ockendon along Stifford Road. He was riding his bike to work when a car pulled up and sprayed a thick white substance in his face. This happened by the Target Car supermarket (the former caravan storage site) along Stifford Road. The thugs sped off, turned round and drove past my husband, turned around and did it again before speeding off in the direction of Daiglen Drive.

“The second time it happened my husband took cover in the Industrial park, waited a while before he considered it to be safe and carried on his journey to work.

“I’m hoping anyone from the Ockendon area, particularly residents along Stifford Road and people who live off the turn of Stifford Road towards Foyle Drive, and also Daiglen Drive near the junction with Stifford Road, may have CCTV or a car with a camera and thy could check their footage. My husband thinks it was a white car but his vision wasn’t very clear.

“We believe the substance was foam or powder that is used by the fire brigade to fight electrical fires, or something similar.

“I hope we can catch these thugs who think its ok to attack a 68-year-old man on his way to work.

“I also want them caught before they decide to throw something stronger over another random person. Next time it may be acid, which will scar some innocent person for life. My husband was lucky in this case. The next person might not be.”

A spokesperson for Essex police confirmed: “We are investigating after reports of a cyclist being assaulted in South Ockendon.