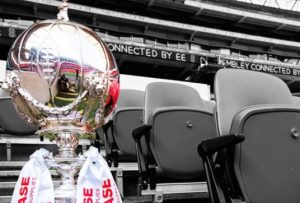 ROCKS slipped out of the FA Trophy in this “Battle of the Rocks” on a damp afternoon down in West Sussex.

Rain lashed down throughout the game, and considering the conditions the players produced a competitive and entertaining cup tie, with Covo’s boys again rueing their lack of fortune in front of goal.

John Coventry included both his mid-week signings, Darren Foxley and the returning Amos Nasha in his starting line-up, but it was the home Rocks who got off to the best start, and they went in front on nine minutes. A Rocks free kick went amiss, and Portsmouth loanee Bradley Lethbridge took advantage to burst past Jack Giddens and score.

Rocks settled into the game, and new boy Foxley had a goal bound effort deflected for a corner.

Home keeper Amadou Tangara was having trouble with the wet ball, and play was held up while he changed his gloves, but this seemed to make little difference as he fumbled another ball at Frankie Merrifield’s feet inside the six yard box, only to quickly recover and smother the danger.

East Thurrock were level on the half hour when lively wide man Alex CLARK, broke down the right, junking past a couple of home defenders before firing a great drive into the top corner.

As the half drew to a close, Sean Bonnett-Johnson had a powerful effort blocked by keeper Tangara.

Rocks would have gone in for a half time dry-off thinking that they were still well in the game, but come the second half it was Bognor who again started the quicker, and it came as no surprise when they scored again on 54 minutes.

A ball in from deep found Lethbridge in space, and he ran on to fire past Giddens.

Clark had a good effort well saved as Rocks pressed forward, while at the other end Giddo saved well to deny Lethbridge a hat-trick.

Rocks threw skipper Ryan Scott forward late on, and he saw a thunderous header beat Tangara, but graze the outside of the post. Then as the game moved into stoppage time the home keeper pulled off the save of the game to finger tip a goal bound. Clark drive over.

Was good to see Adam Topley get some game time late on, his first piece of action in a Rocks shirt after being injured pre-season.