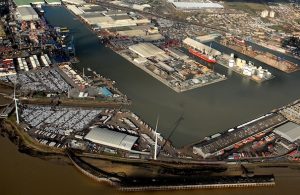 FOUR men who stowed away on an international container ship before crew members were threatened while it sailed within UK territorial waters have been convicted.

Both men along with Samuel Jolumi, 27, and Ishola Sunday, 27, also of no fixed address, were found guilty of affray.

They were all found not guilty of attempted hijack and other counts of making threats to kill following a trial.

They are due to be sentence on Friday 3 January.

Essex Police were contacted at 9.15am on Friday 21 December 2018, by the Coastguard with reports that a cargo ship travelling from Nigeria to Tilbury had four stowaways on board.

They had gained access to all areas of the ship and three members of the crew were threatened – one by Popoola and two by McGree.

The ship was seven miles off the coast of Ramsgate, Kent, and the defendants had attempted to gain entry to its bridge by striking windows and shouting at a crew of 23 people.

The men attempted to intimidate the crew by smearing windows in faeces, blood and urine.

Negotiators made contact with the four men during the afternoon and a boarding party detained the men.

When the ship docked at Tilbury, police then boarded and arrested the men.

Investigating officer Detective Chief Inspector Julie Gowen, of Kent and Essex’s Serious Crime Directorate, said: “As the cargo ship approached the UK’s coastline, the stowaways escaped from an area where they had been secured by the crew for their own safety.

“Popoola and McGree made threats to kill people on board the ship.

“The crew followed protocol and retreated to the bridge where they secured themselves, thus ensuring there was no physical confrontation.

“As a result of their actions no harm came to any party involved.

“We worked with partners agencies to safely bring the boat to shore and secure the arrest of all four men.

“These offences involved defendants from other countries and the sensible actions of the crew ensured not only the safety of all those on board but that of other vessels in the immediate waterways.

“We have carried out a robust investigation into this incident and today four men have been convicted of their actions.”

Chief Superintendent Andy Mariner, Gold commander for the incident, said: “This was a complex emergency involving multiple partners and a 75,000 tonne vessel that was circling in a busy shipping lane.

“This was the first time I’ve had to deploy a military unit alongside our officers.

“Ultimately, the objectives were to take control of the ship and bring it and everyone on board – including the four defendants – to Tilbury safely.

“I believe we achieved these objectives quickly and successfully alongside our emergency partners.

“Following a period of many months and a trial lasting many weeks, four men have today have been convicted for their unpredictable actions aboard a vessel within our waters.”