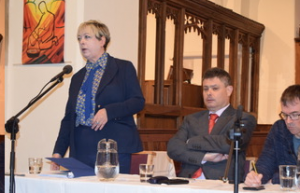 Mr Perrin’s blog; “A Word in Your Ear”

THE candidates hoping to be elected as Thurrock’s Member of Parliament (MP) attended a “hustings* meeting, held at St. Peter and St. Paul Church in Grays on Thursday 28 November 2019, to answer questions from the public. Despite a disappointing turnout, which I believe struggled to reach 100+, the meeting was a civilised affair. The questions asked gave some indication as to what issues were concerning the people of Thurrock and the replies from the Candidates revealed where they stood on those issues.

James Woollard , Independent (not to be mistaken for Thurrock Independent Party} stood his corner but too many of his “objectives” were also the objectives of the Conservatives and Labour. Sadly, for this bus driver, his bus was hijacked and driven through his campaign.

The Liberal-Democrats have scuppered their chances in Thurrock by their stand on Brexit. The Lib-Dems want to revoke Article 50 and pretend the 2016 referendum never happened, talk about sticking your head in the sand. Their intention to completely ignore the 17.4 million who voted to leave the EU is anti-democratic, breathtakingly arrogant and makes a mockery of the name of their Party i.e. They certainly cannot claim to be Democrats.

The Green Party wants to remain in the EU, so they also have scuppered their chances in Thurrock.

The Labour Party candidate, John Kent, on Brexit said though he voted to remain he respects the result of the 2016 referendum, especially the 72% leave vote in Thurrock, and believes it must be implemented and to do otherwise would be far more damaging to the peoples trust in the democratic system of the UK than any perceived damage to the economy in the event of leaving the EU, without a deal. I admire his honesty as this puts him in conflict with the Labour Party manifesto on Brexit which is to renegotiate a new deal with the EU and have another referendum with the option to accept the deal and leave or reject the deal and remain in the EU. The difficulty I have with the Labour approach is why on earth does the Labour Party believe the EU would offer the UK an acceptable deal when all they have to do is offer a deal which they know will be unacceptable, thus ensuring the UK will remain in the EU. Hobson’s choice?

The Conservative Party candidate, Jackie Doyle-Price, on Brexit said “Lets get Brexit done, leave the EU on 31 January 2020 deal or no deal and move on”.

Like it or not it seems the issue of Brexit will be the deciding issue, if not nationally, certainly in Thurrock.

My prediction is Jackie Doyle-Price will win, by how much will depend on how many Labour supporters, who voted to leave, will abstain, vote Conservative or as loyal Labour supporters concerned about issues other than Brexit vote Labour.