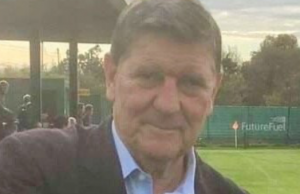 FOLLOWING a rapturous pre kick-off minutes applause by everyone in the ground, the Rocks players then made their own fitting tribute to Ben Bennett by turning in a fine performance to beat this highly rated Boro side.

Rocks went into the game without recent signing, striker Matt Price who was sidelined with a knee injury. Into the starting eleven came defensive midfielder Danny Cossington, who recently joined from Romford.

Covo’s boys made a bright start, and Frankie Merrifield just failed to get a touch on a driven cross, but it was the visitors who took the lead when on 24 minutes Anthos Solomou, one of three full Cyprus international players in the Boro side, curled a delightful effort past Jack Giddens.

Rocks were back in the game some nine minutes later. Skipper Ryan Scott had a powerful header well saved by keeper Cassilias Carro, but the ball fell to Darren FOXLEY who fired in from close range.

The closing minutes saw the Rocks in total command. Straight after Foxley’s equaliser Merrifield broke clear, stroking the ball past Carro only to see the ball strike the foot of the upright. Then Alex Clark jinked his way down the left before sending in a low cross which Mitchell Gilbey was just an inch away from converting at the far post.

Rocks weren’t to be denied though, and went in front on 41 minutes when Amos NASHA fired home a stunning effort from well outside the box. A third goal was added in first half added time when, following great build-up play by Foxley, leading scorer MERRIFIELD sent a powerful header into the net.

The visitors trooped off for the interval looking more than a trifle shell shocked, but then made a lively start to the second half, with Georgious Aresti forcing Giddens into a full length diving save.

However, it was the Rocks who were to score next as Jason Ring’s long throw was headed on by Merrifield for GILBEY to score at the far post.

Rocks would have had a fifth but for a brilliant finger-tip save by Carro to deny Foxley a second.

Boro scored a second late on when Onokwai broke clear to round Giddens, but that was to be the end of the scoring, leaving Rocks to celebrate.