Football: Honours even for Blues against Coggeshall Town 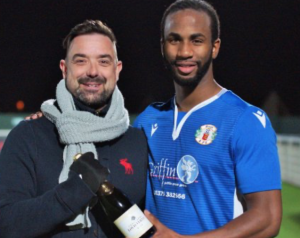 ON paper this always looked to be a tight affair and so it proved to be when Blues and Coggeshall locked horns at Parkside – the football on offer kept the fans entertained seeing two teams cancel each other out, but still playing the game in the right spirit. The play ebbed and flowed throughout the ninety minutes and in the end the control of both defences proved the decisive factor leaving both sides with a point ensuring they remain in the promotion pack.

In the opening period it was Blues who grabbed the initiative forcing the Seedmen on to the back foot, Joao Carlos who has looked subdued in recent weeks was back to his effervescent best driving forward and eliciting a number of questionable challenges.

The first moment of concern for the visitors came via a George Purcell cross that could have gone anywhere when it took a deflection falling into the grateful arms of Ashlee Jones. Purcell was again in action when his shot drifted over. Such was Blues early pressure it forced the visitors to overhit long balls to their front men easy meat for Blues grateful defenders.

Despite the pressure Coggeshall nearly sprang a surprise when a quick break released Jack Simmons inside the box sliding an effort across Danny Sambridge and inches wide of the far post. That miss signalled a shift in fortunes with Blues now coming under pressure as the visitors got their passing game in gear but not really troubling Sambridge, apart from a scary moment following a corner creating a scramble in the box when the Blues keeper grateful dropped on the ball. Minutes later a fierce drive from Tyler Brampton was gathered at the second attempt by Sambridge.

The visitors carried on where they left off in the first period – on the front foot , the pressure forced Blues to drop deep and like Coggeshall they were forced to knock long balls which were coming straight back.

Defences were still the winners though just as openings presented themselves they were quickly snuffed out with swift and clinical efficiency, Dexter Peter in his first game for a month showed enough to prove he will be a real asset at the back, being left footed it allowed Lewis Clark to move to the right and with Steve King in the middle gave a more balanced rearguard and security .

Coggeshall continued to press but had a lucky escape when a Blues break resulted in a throw in launched by Mitch Hahn, finding King he glanced a header cleared off the line at the last moment. Coggeshall replied the ball was switched out wide to Simmons jinking forward his shot not troubling Sambridge.

The pendulum swung again with Blues now looking the more incisive, sub Manny Ogunrinde was involved straight away when he nodded into the arms of Jones and then an astute pass from Hahn set up Carlos, turning his marker he forced Jones into an acrobatic save to keep the scores level. Carlos had a great chance to break the deadlock but hesitation and an extra touch allowed the visitors defence to clear the danger.

The Carlos chance proved the finale to an intriguing encounter and on the balance of play a draw was the fairest result between two evenly matched outfits.