BBC’s Flog It comes to Tilbury 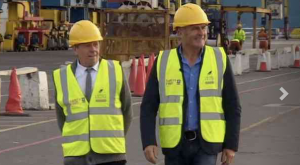 ONE of the last of the TV series Flog IT! that was filmed in Tilbury has been aired.

The show was filmed in 2017, just before it was announced that the BBC would be cancelling the long running programme at the end of its 17th series, which is now being aired.

On the show presenter Paul Martin and experts Philip Serrell and Nick Davies met local folk who flocked to the Tilbury Cruise Terminal with a wide array of goods.

During the show, which invites members of the public to bring their antiques to be viewed and valued with an option to sell at auction, Paul Martin met local community stalwart and former docker Les Morgan for a stroll around the Port of Tilbury, where Les shared some of his memories.

You can view the episode on the BBC Iplayer site: https://www.bbc.co.uk/iplayer/episode/m000c62x/flog-it-series-17-episode-13