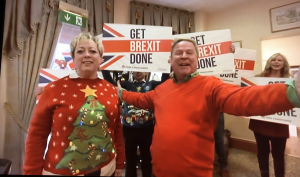 THURROCK MP Jackie Doyle-Price has found herself ‘going viral” after her election video starring former Dollar star and Aveley councillor, David Van Day appeared on BBC’s Have I Got News For You.

The video has Cllr Van Day singing a variation of “We wish you a merry Christmas” but with the tag line “Get Brexit Done”.

It seems to have worked as just a few days later, Jackie Doyle-Price was returned as MP with an 11,000 plus majority.

After seeing the video, comedian Paul Merton quipped “Is that the Dignitas Christmas message?”