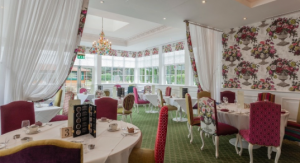 THE last time this writer ate at the Orsett Hall was 2006. The food was bland, the decor dated and we were the sole diners in a dying business. A devastating fire in 2007 razed the building to the ground but, as a listed building, the owners decided to rebuild in the style of the original building. A very fine job they did too and they added bits. Orsett Hall is now a thriving business with a constant stream of weddings and parties as well as being a hotel and health spa. It also has several restaurants ranging from the large wedding/Christmas party size to the more relaxed and subtle restaurants. The Garden Restaurant fits into the latter category with seating for about 70 in a pleasantly decorated room which brings in the garden theme nicely. To be honest the room would look it’s Sunday best on a warm summer day and not a miserable winter evening but the soft lighting and warm colours blend nicely together.

The menu is quintessentially English with a choice of seven starters and thirteen mains and thats just about right. Some restaurants offer pages of trips around the world and don’t do anything particularly well but the Garden Restaurant has set it’s policy as simple and strong.

From a hard to chose starter menu we selected the wild mushroom risotto and a chicken and leek terrine. The secret of a good risotto is the quality of the stock and this chef knew what he was doing. Lovely wild mushrooms and a flavourful rice topped with balsamic dressed wild rocket hit the spot and you just knew that this dish had been prepared fresh straight from order. The terrine was equally as tasty but was accompanied with a gorgeous homemade piccalilli which should be celebrated by itself.

And so to the mains. I am presuming this was the Garden’s winter menu and there was something for everyone with three fish dishes, seven meat and three vegetarian options. Perhaps a welcome addition would be a slow cooked meat casserole instead of the turkey crown but that is only a minor issue. I love slow cooked pork belly and often end up choosing that and with good reason. The chef even adds a twist by serving the all important crackling as a giant wafer. Delicious. The generous ribeye steak was rich in flavour and the accompanying red wine gravy supplemented the meat perfectly. Now onto the side vegetables. Always contentious, especially brussels which should be boiled to oblivion by one generation and slightly shown some heat by another. These were just right and were so much better for being joined in the pan by pancetta. A must. In fact it’s the law of England. The final course was eaten in a daze as I was really too full to contemplate more but just to say the creme brûlée was premiership material.

This is not fancy dining, the portions are generous and the food is freshly cooked and served hot. It’s absolutely delicious and reasonably priced. You will spend anywhere between £30 and £40 per person for a three course meal, not including drinks.

Well done to chef Shaun who’s food was delightful and well done to Emma who was charming and knowledgeable.

I judge a restaurant on its afterglow and the Garden Restaurant passed my test easily. I thoroughly enjoyed the whole experience and left feeling I wouldn’t need to eat again for at least another four days.

Totally recommended and we will return soon.