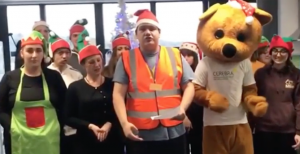 MANY years ago, we interviewed a young filmmaker who was a pupil at Treetops School.

Samuel Turner was winning awards then and it looks like he is now.

Samuel has moved to Wales. In January 2017, Samuel, who has autism joined Cerebra, a Welsh Children’s charity as volunteer.

He has helped the charity by fundraising and promoting the charities work. He also made another inspiring story ever to be shown on the big screen.

A 2019 charity short film, ‘When Efforts Begins with Cerebra,’ is award winning short film based on real life awareness and also inspired by Samuel’s experience helping the charity with his friend Angel Jolly and his family too.

In September 2019, the short film ‘When Efforts Begins with Cerebra’ was submitted to the Wales International Film Festival for the finals in September.

The short film will now be on DVD for donations only to customers in ‘Starvin Marvin Café & Restaurant’ in Carmarthen, West Wales.

All of the donations raised for the short film will go to Cerebra Charity UK.

Next year in 2020, Samuel will be back at the Southend-on-Sea Film Festival 2020 to introduce his award winning film ‘When Efforts Begins with Cerebra’ which shows that young people with brain conditions are so special and talented too in any certain ways.”