Controversial planning application could be approved despite hundreds of objections 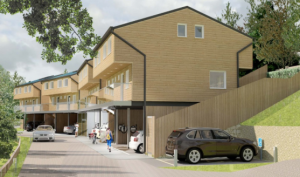 MORE than 300 objections to a planning application look set to fail after Thurrock Council’s planning team said it was not enough to justify refusing planning permission.

The plan to build eight homes on land adjacent to Curling Lane, Helleborine and Meesons Lane in Grays is due to be discussed by councillors next week and likely to be granted planning permission following a positive recommendation from the council’s planning team.

But the recommendation is likely to result in a strong response from neighbouring residents after 217 people signed a petition in opposition and 93 sent letters of objection.

Their concerns centre heavily on the design of the two-bedroom properties which developer Zed Pods describes in planning documents as “maisonette pods” that will be “built on top of a steel or concrete base”.

This will mean that the ground floor level will be used as a garage area with parking, while the two-storey living area will be built above.

Zed Pods has promoted that the development would make use of solar panels and the homes would be “carbon-free”.

But residents say in the petition that the design is “not in keeping with the appearance of the estate” and it will result in the loss of green space and woodland.

In one letter received by the council, a resident wrote: “The proposed development is out of keeping with the existing two storey buildings, being on a bank and three storeys high they would overlook nearby homes.

They add: “The proposed development looks very cramped in the space, with very little amenity space.”

The council’s planning officers claim in a report that the scheme makes “efficient use of the land” and say that while the design would “different” it does not justify refusing planning permission.

The council’s highways officer has also raised no objections despite concern from residents about congestion as Helleborine is already used as a drop-off point for the Belmont Academy School.

The council’s recommendation concludes: “The proposed layout and all matters of detail would be acceptable to create a suitable modern development.”

The plans will be discussed at Thurrock’s Planning Committee on Thursday night.