Thurrock’s population one of the fastest growing in the country 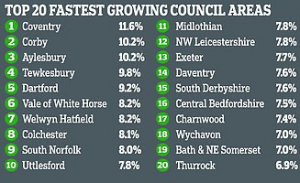 THE population of Thurrock is one of the fastest growing in the United Kingdom, a MailOnline investigation has revealed.

The population of the UK is projected to increase by three million over the next ten years, as experts warn a major acceleration in house building is required.

In central London, population growth has risen by 44 per cent over the past five years and in Tower Hamlets, east London, by 16 per cent.

MailOnline has analysed data from the Office for National Statistics to reveal in which parts of the country population growth is rising the fastest.

Looking at data from 2013 to 2018, certain council districts across the country have seen their populations grow massively.

In some parts of the country, however, such as Ceredigion in Wales and Copeland in Cumbria, population has actually decreased – by minus 3.6 per cent and minus 2.3 per cent respectively.

It comes as the ONS reported that UK population is projected to pass 70 million by mid 2031, reaching 72.4 million by 25 years into the projection.

There will also be an increasing number of older people; the proportion aged 85 years and over is projected to almost double over the next 25 years.

In May, it was revealed that more than 27.6million families will need housing by 2041 if the population continues to increase at present rates. At present there are 23.4million households in England.

The figures, from the Office for National Statistics, suggest a major acceleration in housebuilding will be needed to cope with future levels of households.

To meet that target nearly 200,000 new homes a year would be needed. Last year, according to Whitehall estimates, around 165,000 new homes were built.

The figures were part of a series of projections of the likely future numbers of households in England calculated by the ONS.

The projection that there will be 27,621,000 households in 2041 is based on the possibility that immigration will continue at high levels.

The figure for immigration used to reach the estimate is net migration of 215,000 each year.

Latest figures for net migration – the number by which the population grows after both immigration and emigration have been taken into account – show a level of 283,000 for the year to last September.

A series of recent estimates have drawn new attention to the impact of immigration, especially in the crowded southern half of the country, on housing, transport, education, health and water and energy supplies.