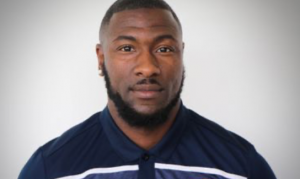 ON a day to celebrate Joao Carlos’ 400th appearance for the club, Grays Athletic put in a performance to match, as they beat Great Wakering Rovers at Parkside.

The game started got off to a cagey start with neither team wanting to make a mistake early on. The sole effort in the opening exchanges was a long-range effort from Rovers’ central midfielder Jack Stevenson, forcing a comfortable save from Danny Sambridge diving low to his left.

As Grays looked to take advantage of the slow pace of the game, they won a corner on the right-hand side. After it was cleared, the ball found its way to the right again to corner-taker Macauley Joynes, who put in an in-swinging cross onto the head of Steve King who headed just wide from close range. After another Grays attack, the ball was cleared forward to Kojo Apenting. The Rovers winger rushed forward with intent, cutting inside onto his right foot. After a couple of feints he created an inch of space, but blazed over the bar from just inside the area.

On the 20-minute mark Grays started to take hold of the game. With Rovers’ fullback caught out of position, Joao Carlos found himself with in space on the left wing. With a darting run he drove towards goal and put in a dangerous cross into the box. As the ball was cleared by the defence, it fell to striker George Purcell, who was unable to find the near corner with a left footed effort, shooting inches wide. Due to Blues dominance Rovers were forced to heave long balls forward and shoot from long-range. On one effort, an unexpecting Sambridge had to scamper backwards as a George Cox effort fortunately hit the top netting from 35 yards.

The pressure didn’t stop from Grays, who created their best chance of the half on the 30-minute mark. Mitchell Hahn found himself with the ball in space on the right wing. The central midfielder put in a fizzing cross into the box. Joao Carlos jumped highest at the far post, bringing out a great save from goalkeeper Bobby Mason, diving low to his right to tip wide. 5 minutes later, and the same thing happened again. Another great cross in from the right was put into the area. This time, it was Joynes who wandered forward and found himself unmarked. This time, the defender nodded over from close range.

With the half looking to be ending scoreless, Grays created the best chance of the game so far. Joynes again found himself open on the left-hand side after another roaming run forward. His cross was put just behind Purcell, who did incredibly well to hit the ball on the half-volley with his left foot. As the ball looked destined for the near post, Mason pulled off and equally incredible save, to tip the ball to his defence, who gratefully cleared.

Blues dominance continued after the half-time break. After Rovers looked to close down the left-hand side, after Joynes consistently found himself open in the first half, the ball was moved to the right more often. Nathan Fox was the beneficiary, as the right-back put in a cracking ball over the top to Purcell, whose touch took away his opportunity to shoot. Instead, he drilled the ball across goal, with the Rovers defence fortunate not to tap into their own net. In a half where Rovers offered very little going forward, the only bright spark was winger Jake Gordon. He made a number of darting runs and caused problems for the Blues defence. With one of those runs from inside his own half, he picked out Martin Tuohy who brought out a solid stop from Sambridge, diving to his right to tip wide.

Rovers’ 10-minute spell of dominance was halted promptly by Blues. More great work from Fox down the right created space for Manny Ogunrinde, whose cross forced some great defending from Rovers, as they somehow cleared when facing their own goal. Pressure told again, as Grays’s midfield proved dominant. 5 minutes later, they hit the bar, with a speculative effort from 30 yards, giving Rovers a significant wake-up call. Grays would be kicking themselves if they did not take the lead as the game headed into the final 10 minutes. After a couple of half chances, the game looked to be heading for a draw.

In the final minutes of regular time, however, the pressure finally told. As the ball was slickly moved around the middle of the park by Grays, they worked the ball into space with the onrushing captain Mitch Hahn, who rifled a shot towards goal. With yet another save from the Rovers keeper, the ball was parried to Joao Carlos at the top left of the box. Carlos took it first time on the half-volley, rifling the ball into the top right corner.
With very little offered going forward, the game ended 1-0. A fitting end to a dominant Grays performance, with celebrated Joao Carlos scoring a winner in the dying seconds.