ESSEX Firefighters helped to rescue two dolphins from Stanford-le-Hope this afternoon after they had become stuck in mud around 200 metres from shore.

Crews worked with the Coastguard and the Royal National Lifeboat Institution (RNLI) to use a hovercraft, which allowed them to reach the dolphins more efficiently. Firefighters were also assisted by the British Divers Marine Life Rescue organisation throughout the rescue.

Firefighters managed to release the dolphins and used an inflatable sled to help move them back out to sea by 5.45pm. Both animals were unharmed. 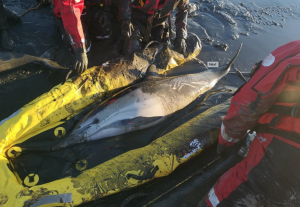 Water Incident Manager Al Green said at the scene: “It’s not every day that you come across dolphins in Essex… so we wanted to do everything we could to help them on their way safely.

“Firefighters have gone above and beyond with partners from the Coastguard and the RNLI to do just that this afternoon, despite difficult access and challenging conditions.

“With the tide not expected to come in until several hours after the dolphins became stuck, we knew how important it was that we came to their aid. Thankfully both animals are okay and back in the open water.” 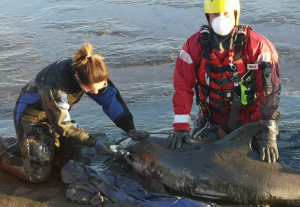